RUSHLANEDAILY AUTO NEWS
HomeEverything ElsePolitician refuses to move his Tata Safari - When cops are about...

Politician refuses to move his Tata Safari – When cops are about to tow, he almost runs over a cop

A video has gone viral on social media showing off the tough stance taken by traffic police despite the offender being a political party leader from Vijaywada, Andhra Pradesh. The incident occurred on 4th August at 8.00 pm, on RG Road, one of the busiest streets in the city.

Vengala Rao Laka, Former President of BJP City Wing is also the owner of Laka Shopping Mall on the same street. He had parked his car outside the mall and was asked by the traffic police to move the car and park it in a parking lot as the Chief Minister’s convoy was supposed to pass by the road. 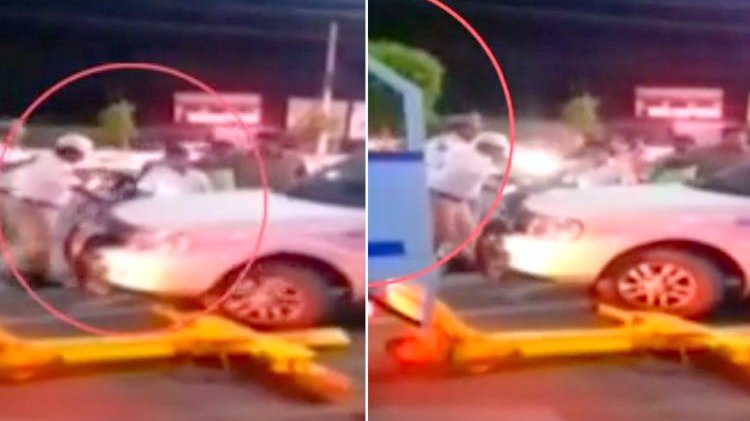 Traffic inspector-in-charge of the case, V. Subbaraju asserted that Vengala Rao turned a deaf ear to his pleas to remove his car and argued with the cops on duty. It was when the cops threatened to bring in a tow vehicle and forcibly remove his car that Rao got into his car and the video shows how he can be seen almost running over the traffic policeman.

Though a few traffic police can be seen surrounding the white colored car, the driver of the car sped off on seeing the towing van. Watch the incident in the video below.

The traffic cops alerted the next check post but the car did not stop there either. The police filed an FIR against Rao under Section 236 of IPC for endangering human life and prevention of damage to public property. He was arrested later on the 4th night and presented to the court on the 5th morning after which he was sent to judicial custody.

The action taken by the traffic cops irrespective of his position as a party leader of the BJP and a former Andhra Pradesh President of Akhila Bharatiya Yadava Mahasabha (ABYM) sends out a strong message that no one is above the law. It is now hoped that Rao receives the due punishment for committing such a crime and he does not use his political clout to escape punishment.