Despite the ongoing crisis of Covid-19 pandemic, the automobile industry seems to be on the road to recovery. Despite a decline in YoY sales figures, the premium hatchback segment continued to pull off decent numbers. This is maybe attributed to the need for personal mobility in order to avoid shared mobility.

Maruti Suzuki Baleno continues to dominate this segment, despite a slight YoY decline of almost 3 percent. In August 2020, a total of 10,742 units of Baleno were sold by Maruti with respect to 11,067 units sold during the same month last year. Baleno is also the only car in this segment to sell past 10,000 cars last month.

Hyundai Elite i20 comes in next at the second position with 7,765 units sold last month. This is an increase of almost 10 percent on YoY sales with 7,071 units sold last year during the same period. The sales of i20 are expected to increase further when the new generation i20 arrives in the market. The new i20 model is expected to be launched sometime next month. 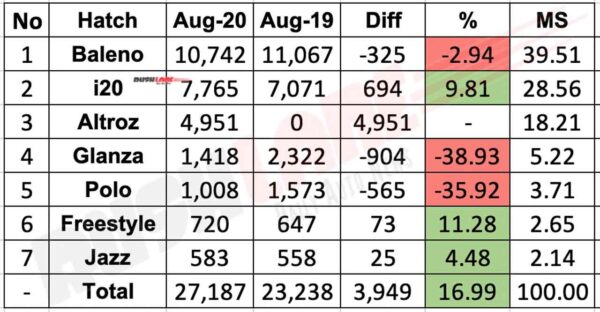 Altroz gets a Positive Response

The Tata Altroz is the latest entrant to this list with it being launched earlier this year in January. Tata Motors sold 4,951 units of Altroz during the month of August this year. Since it was not available during the same period last year, the sales figure shows zero units. Altroz is the only car in top 3, which is offered with diesel engine. Baleno and i20 are only offered with petrol engine options.

Altroz is followed by Baleno’s Toyota twin- Glanza at fourth place after it sold 1,418 units. This is a drop of almost 39 percent when compared to August 2019 where it registered sales of 2,322 units.

Next up in the fifth position is Volkswagen (VW) Polo which sold just over 1,000 units. VW sold 1008 units precisely which is 565 units less than the number of Polo sold last year during the same month. It witnessed degrowth of almost 36 percent from last year. Lack of space, practicality, features and high cost are the primary reasons why Polo comes so low in the chart. This car is meant primarily for enthusiasts who love to have some fun while driving and its new 1.0-litre TSI petrol engine surely provides a lot of that.

The Ford Freestyle is another hatchback with a spirited drive and impressive performance. Despite being an attractive offering, the Freestyle continues to be on the lower side of the sales chart. Ford sold 720 units of Freestyle last month which is a slight increase from the same period last year.

Last in the segment which occupies the seventh position is Honda Jazz which sold only 583 units. In August 2019, Honda sold 558 units of Jazz which is an increase of 4.48 percent. Although the popularity of Jazz cannot be figured just yet since its BS6 updated form was recently launched in the middle of last month.