The Indian automotive market is gradually making a recovery from COVID-19 and its initial lockdown protocols. Major automakers resumed operations as soon as the government eased down its control measures in early May. However, automotive facilities (plants, dealerships, service outlets, etc.) in orange and green COVID-19 zones are the only ones allowed to operate. Staff are advised to take all necessary precautions and follow effective sanitisation practices.

Compared to April 2020 which saw the lowest sales figure in recent automotive history (virtually zero domestic units), later months have returned much better results. But numbers still remain on the lower side if we compare them with pre-COVID times.

In June 2020, premium SUVs (primarily mid-size SUVs and relatively expensive compact crossovers) witnessed a sales count of 1,262 units. This is a major decline (roughly 48%) as against 2.428 units back in the same month, a year before. Let us take a look at how popular names in the segment have performed on the sales chart:

Toyota Kirloskar Motors’ sought-after mid-size SUV, Fortuner topped the list at 713 units; 510 units (-41.70%) less than June 2019. Unsurprisingly, Ford India’s Endeavour follows its arch-rival at almost half the number of sales. It hit 366 units in June 2020 compared to 716 years last year and went through a slump of almost 49%. No entrant on the list touched four-digit sales figures.

Skoda Auto’s Kodiaq, available only in petrol BS6 format, marked 151 units last month and actually went up on sales. The Czech-origin brand under Volkswagen Group had sold only 93 units in June 2019 and enjoyed a sales rise of 62.37%. Hyundai Motor India’s Tucson will receive a facelift later in the month. The current model met 30 units in June 2020 sales — down by more than half.

Honda Car India’s flagship product, CR-V has never been a strong seller. Last month, the 7-seater could achieve only two units in sales and faced a massive decline of 96.36% (-53 units). Despite becoming compliant to BS6 emission norms, Mahindra & Mahindra group’s Alturas G4 could not return a single unit in sales. 109 units were sold in June 2019.

Finally on the list comes Volkswagen India’s Tiguan AllSpace. Like every other product under Skoda Auto Volkswagen India group, the 7-seater comes solely in petrol format. Sales could not match even a single unit as its BS4-compliant 5-seater counterpart. Unless India goes into another stage of nationwide lockdown, overall automotive sales should attain normalcy towards the end of this year. 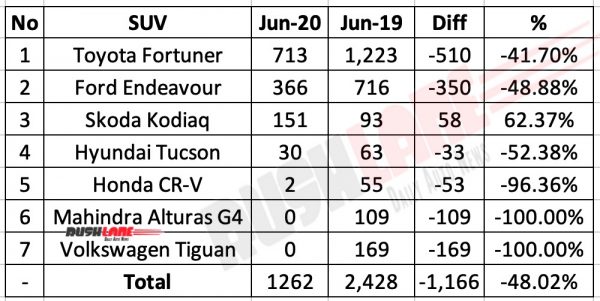