Pune Police shares traffic fines list – If you are being fined more, let them know

In a recent crackdown, the Pune traffic cops have come down heavily on motorists and two wheeler riders breaching traffic regulations. The police have decided to levy heavy fines on those driving on the wrong side of the road, riding triple seat and stopping on the zebra crossing at traffic signals. CCTV cameras are being positioned at strategic spots across the city to capture images of these offenders.

A motorist captured on these CCTV cameras breaking traffic regulations will find his vehicle confiscated and heavy fines levied. The vehicle will only be returned once the fine is paid. Action is also being taken against those who abuse and physically attack traffic policemen doing their duty while courts have been asked to speed up action to be taken in such cases.

The Pune Police Department has released a list of offences and amount of fines to be levied in each case along with the section under which the offence will be registered. This is an exhaustive list of 42 traffic offences with fines ranging from Rs 200-2,000.

This has been done by the Pune Traffic Police to become transparent. Some citizens have complained that the cops charge more than the actual fine. To out that matter to rest, they have revealed official list of fines for traffic and parking violations. If a traffic cop is charging higher fine, citizens are requested to let the Traffic Police department know via social media or by calling 100 or by visiting a Police Station.

The traffic police will crack down on those drivers without licenses and fine them Rs 500, while those riding without registration will be fined Rs 1,000. Those riders/drivers not carrying licenses, fancy number plates, riding without helmets/seat belts, talking on mobile phones and honking in silence zones will all be heavily fined. 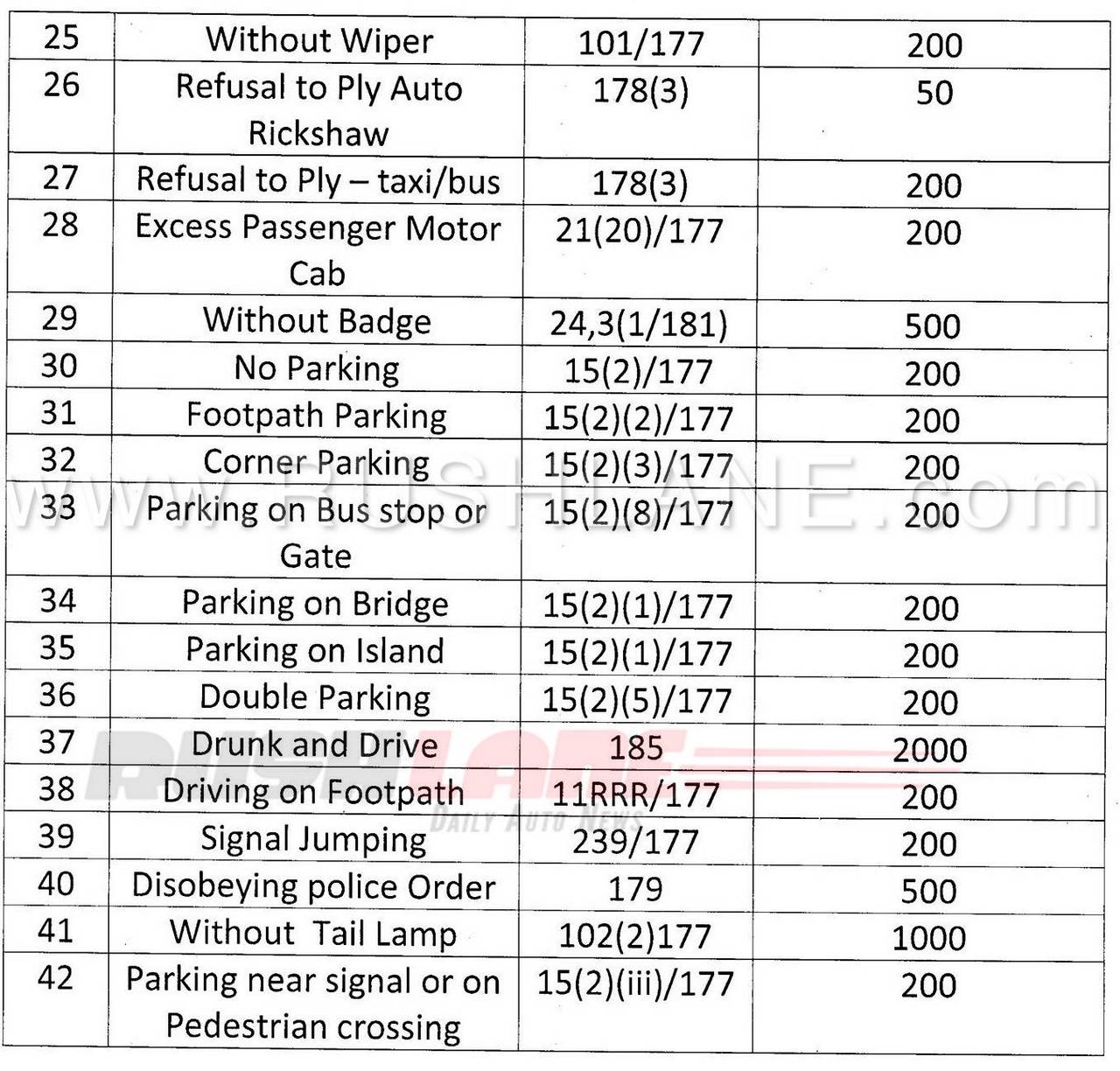 The Pune traffic cops are also keeping an eagle eye out for offenders who park in no parking zones and will be clamping these vehicles with owners having to pay heavily to release their vehicles. Speed violations, halting on zebra crossings and racing on the roads will also be among these traffic violations which will entail heavy fines.

Drivers of cars with tinted windows will not only be fined Rs 200 but will have to remove the films as well. Refusal of auto rickshaw drivers to ply to a particular destination will be against the law and under section 178 (3) of IPC will be fined Rs 50. Footpath parking, corner parking or parking near a bus stop or gate will also entail fines of Rs 200 while drunk and drive will be at the top of the list with a fine of Rs 2,000.