Miami, the city in Florida best known for its beaches, Cuban culture, architecture and the cars the city’s who’s who own. One of its resident has tried to mix two of the above in an attempt to install a unique art piece in his oceanfront condo.

The resident is Pablo Pérez Companc, an obvious petrol-head and a fulltime race driver from Argentina. He wanted a distinctive installation for his uber-luxury condo in Miami and decided to use a Pagani Zonda R as a room-divider. It certainly will be unique, considering the fact that there are only 15 Pagani Zonda R’s which were ever produced and we doubt if any other owner would dare to repeat this feat! 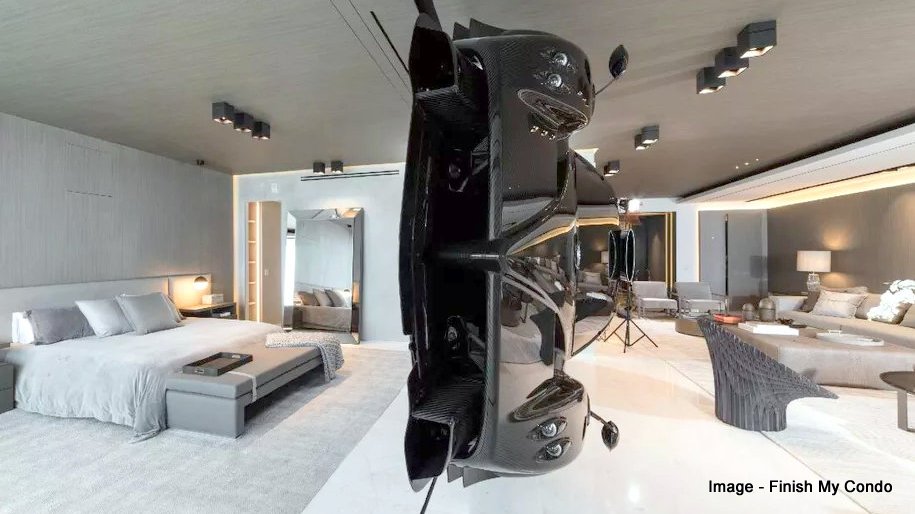 In case you already feel envious of Companc, it is justified. However, in case you feel like deploring the race car driver, let us break the news first. This installation is not an actual car, instead a replica of the same.

According to the Argentine, it is a copy of the car which he owns. He posted the following on one of his Instagram posts, “I would never condemn Black Minion (read Pagani Zonda R) to being locked in a living room. Race cars are for driving.” Hope that it brings in some solace to your inner soul!

As per reports, Companc had to use the services of a crane to lift the replica up to his floor before the installation could take place. The car has been installed in Companc’s living room, where the piece of art is held in its place by a stand made out of aluminium and carbon-fibre.

Talking about the Zonda R, it comes powered by a 740 horsepower 6.0 liter V12 Mercedes-Benz engine, shared by the Mercedes-Benz CLK GTR. This version of the Zonda R is a track-only variant and has a top speed of 350 kmph and can do a 0-100 kmph in just 2.7 seconds.