Photos have been revealed proclaiming a monster vehicle as the ‘largest SUV in the world’. This monstrous 10 wheeler monster vehicle weighs 24 tonnes. It is built from a military truck and a Jeep and is built exclusively at the request of Sheikh Hamad bin Hamdan Al Nahyan, from Abu Dhabi, UAE.

‘Dhabiyan’ as it is so called, consists of a body and engine from an Oshkosh M1075 military truck while its driver and passenger cabin is from a Jeep Wrangler SUV. It is a 10 wheeler vehicle and weighs 24 tonnes. Its dimensions stand at 10.8 meters long (35 feet), 3.2 meters tall, and 2.5 meters wide. 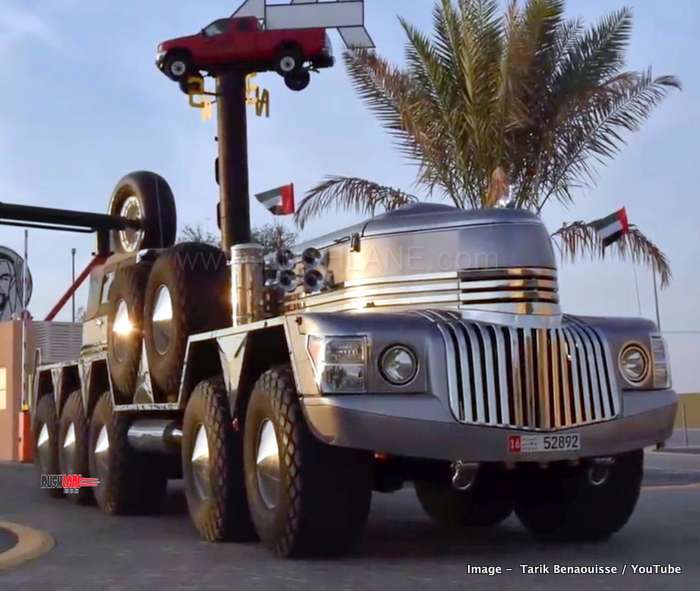 The Dhabiyan can be seen in a mix of parts. It is based on the Oshkosh M1075 military truck with the PLS (Palletized Load System). It sports a 15.2 liter 6 cylinder, 600 hp Caterpillar engine.

It gets its front end from a truck from the 1940 along with a lighting set up from Ford Super Duty pickup truck while its rear bumper is borrowed from a Dodge Dart.

This massive SUV is just one of the many exclusive and highly expensive vehicles owned by the Sheikh, who is a member of the ruling family in Abu Dhabi. Sheikh Hamad bin Hamdan Al Nahyan is also known as the ‘Rainbow Sheikh’.

The reason he is called Rainbow Sheikh, is because he got Mercedes Benz to build him an S-Class in every color of the rainbow. This colour scheme extends right from the wheels to its interior color scheme. He did this to celebrate his marriage. In case you want to have a closer look at his collection, it can be had at the Emirates National Auto Museum in Abu Dhabi, where the Dhabiyan is also on display. If not, then below is a photo gallery for you.