While rivals focus on a long list of features, Duster turbo petrol is wooing customers with more powerful performance and that too at much affordable rates. Here’s a quick comparison of engine and specs to understand how Duster turbo petrol stacks up against Creta / Seltos turbo variants. 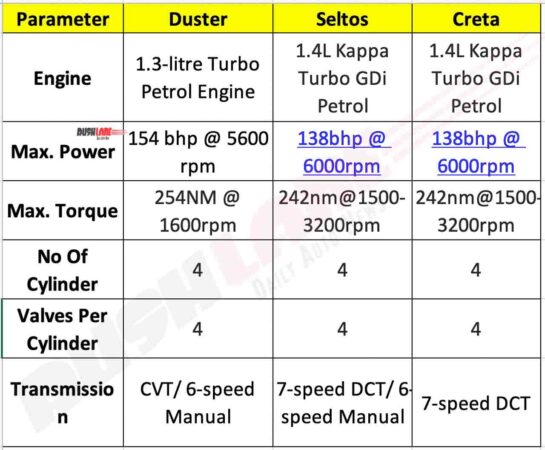 Duster turbo petrol’s power and torque output may be the best in its class, but what about other features? Let’s compare some specs to understand which SUV is the better equipped in this group.

Comfort and convenience – Creta and Seltos have a longer list of features such as front row ventilated seats, auto air purifier, driver rear view monitor, and Bose premium sound system with 8 speakers. The 10.25 inch touchscreen infotainment system is also larger, as compared to the 7-inch unit on Duster. Another key feature that people will miss on Duster is sunroof, which is available with Creta and Seltos.

It’s clear that Renault has taken a no-frills approach with Duster turbo petrol. It is offering superior performance at much lower rates, which could be an attractive proposition for a specific group of customers. Duster turbo petrol prices start at Rs 10.49 lakh whereas Creta and Seltos are priced much higher at Rs 16.17 lakh and 15.54 lakh respectively.