Renault Kwid 800cc modified into an Electric Hybrid in Kerala

The group had graduated from Rajagiri School of Engineering back in 2018 and had worked upon converting a Maruti 800 into an electric vehicle (with a range of around 50km). They had displayed the modified vehicle at multiple expos and got appreciation for the same.

Iype Koshy, a businessman from Trivandrum also came across their previous project and decided to set up a company with the group which now specializes in converting cars into hybrid vehicles and has aspirations to get into Hydrogen and Electric powered cars. The company is known as HyMotiv and their latest project involves the Renault Kwid Hybrid, which is the focus of our story.

The highlight of the project happens to be its Hybrid powertrain. The team has retained Kwid’s petrol engine but additionally added electric motors in the rear wheels to make the vehicle an hybrid. So now, the vehicle can run on petrol alone, electric power alone or a combination of both the two. 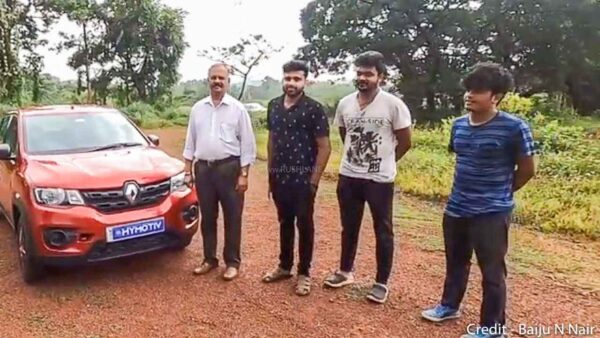 The engine produces power like in a conventional Kwid, however the 34 hp motors in the rear wheels help with additional power output for the Kwid. All 4 wheels have been fitted with disc brakes, which help with sufficient braking power to safely maneuver the vehicle.

The total range of the electric-only powertrain is 150 km. The battery of the project has been sourced from China but the team intends to replace it with an Indian-made battery soon. The motors and controllers have been imported from USA. Overall for the drive, the major traction comes from the electric motors which contributes to around 65% of the power output.

A synchronizer further helps to balance the speeds between the front and rear wheels of the vehicle. Combined mileage of the powertrain stands at 48 km/l. The team also states that they have installed a pollution reduction mechanism through which they can reduce the emissions by 60% and improve the mileage by 20%. Team claims that they have already filed a patent for the same. 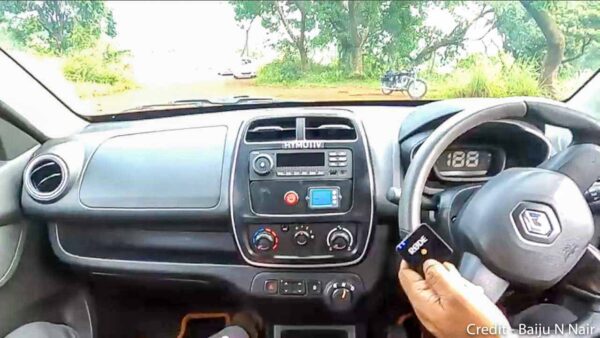 The battery takes 5 hours for a complete charge via a standard wall mounted charger. On the inside, the car includes an electric motor drive selector on the dashboard. Upon start, the car automatically starts in the ICE mode and then manually needs to shifted to EV-only mode or Hybird mode, as per requirement.

The team has also worked upon a fatigue detection system which includes smart spectacles which can detect closing of driver’s eye lids. The first level alarm includes a vibration in the spectacles while the second level alarm includes a pronounced warning from the speakers. They are also working upon monitoring brain waves to further improve the accuracy of their fatigue detection system.

Taking a cue from Global OEMs which have worked upon autonomous driving technology, the team has plans to introduce auto park function which will allow the car to park in a designated spot while taking directions from the mind of the driver remotely. This technology too is under preliminary development stage and it will be interesting to see the final result sometime in the future.

Overall, the Renault Kwid Hybrid Electric is an impressive attempt at localized modifications, however it is still far away from being commercially viable. However, we are hopeful that in the coming years, similar entrepreneurs can possibly help to change the auto-landscape of the country.