Gurugram based, Revolt Intellicorp, a new entrant into the electric two wheeler space in India, has opened a new dealership in Andheri West in Mumbai. This is the 6th such dealership opened in India, following its presence in 5 cities of Delhi, Pune, Ahmedabad, Hyderabad, and Chennai. It is from this new Hub that the company will cater to demands of buyers in and around Mumbai. Called the ‘Revolt Hub’, the company will sell the Revolt RV400 and RV300.

The RV400, launched in August 2019, is first electric motorbike that comes in with cutting edge design and technology. It has seen outstanding demand in the cities where it has been launched. Revolt RV 300 is as entry level electric commuter motorcycle. 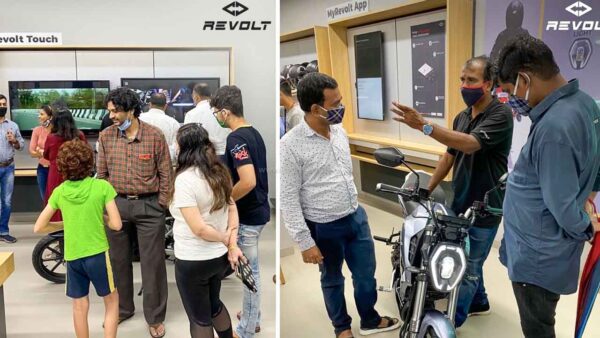 Both the Revolt electric motorcycles get LED head and tail lamps, LED DRLs and connected technology via smartphone app offering geo-fencing, vehicle status and live tracking, etc. The bikes receive a fully digital instrument panel with Bluetooth connectivity. Braking and suspension is via USD front forks and monoshock at the rear along with standard 240mm front and rear disc brakes with RBS – Regenerative Braking System. The RV400 sits on 17 inch alloy wheels and offered in colours of Rebel Red and Cosmic Black colour options.

Revolt RV400 is packed with power. It gets a 72 volt lithium-ion battery offering 3.24 kWh allowing for a range of 150 kms on single charge and a top speed of 85 km/h. RV300 uses a 2.7 kWh battery pack and gets a range of 80 km and top speed of 65 km/h. Revolt Motors offers a removable battery so that it can be charged either at home or at office via a 15 amp charger. It can also be charged at any Revolt Switch Stations in 60 seconds while a full battery charge is possible in 4.5 hours.

The company is also offering unlimited battery warranty of 8 years or 1,50,000 kms, product warranty of 5 years or 75,000 kms and free maintenance benefits of 3 years or 30,000 kms along with 1 year company owned and 5 years third party insurance.

Revolt Intellicorp had initially planned entry into Mumbai in March 2020. However, the COVID-19 pandemic delayed such plans. Now that normalcy is being restored across the country, the company is working on new orders coming in from the ‘Revolt Hub’ in Mumbai. Production has commenced at the company plant in Gurugram as per Government of India orders and expects to see some form of normalcy in terms of production and timely deliveries to customers.

Revolt RV400 and RV300 see no direct competition in the electric motorcycle segment as all the other offerings are scooters.