One of the worst affected is the three-wheeler passenger carriers segment. The reasons are obvious, as movement of people has been restricted in the current scenario. Moreover, people are preferring to avoid travelling in rickshaws or buses. 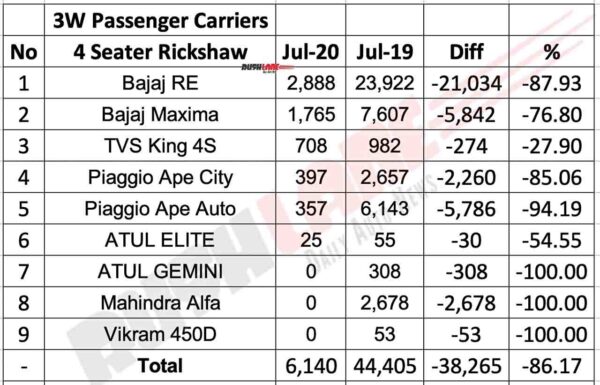 Atul Elite takes the sixth place with 25 units sold in July. Sales have more than halved, as compared to 55 units sold in July last year. 4-seater rickshaws that did not sell even a single unit include Atul Gemini, Mahindra Alfa, and Vikram 450D. Numbers are grim, and the segment has contracted by 86.17 percent, and there’s no current bailout indication.

Atul Gem tops the list in 7-seater rickshaw segment with sales of 509 units in July. YoY sales are down -71.75%, as compared to 1,802 units sold in July last year. All other 7-seater rickshaws have registered zero sales with the exception of Vidyut Passenger that has just one unit sold in July. 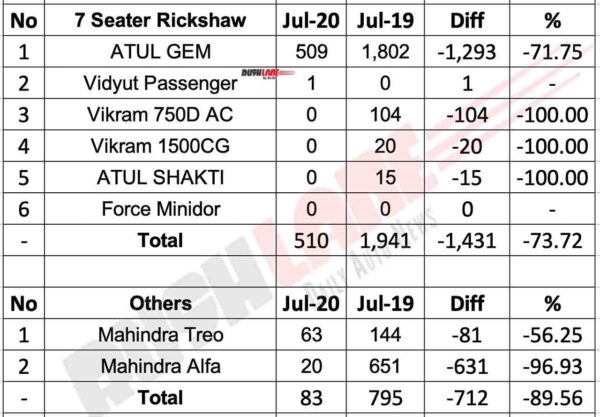 Other products in the 3-wheeler passenger carrier segment include Mahindra Treo and Mahindra Alfa, both of which have registered negative YoY growth in July. Sales are 63 units and 20 units, respectively, which is YoY loss of -56.25% and -96.93%, respectively. 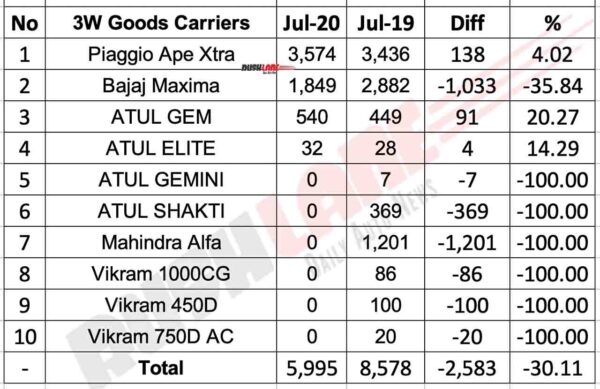 It’s clear from above stats that smaller brands have been the worst hit, as sales have reached zero units. This is likely to make it tough for these companies to survive the current challenges. It is also likely to result in widespread job losses, especially in the unorganized sector. Hopefully, a turnaround could be expected by year end with the festivities in between and potential launch of a Covid-19 vaccine.