In a crack down on two wheeler riders and pillion riders, the Government of India has got even more serious in the implementation of the helmet policy. Traffic police along with the transport department in various cities across India has implemented a special drive wherein it was made mandatory for two wheeler riders and pillion riders to wear helmets. However, riders seen to have turned a deaf ear to these regulations and continue to flout the rule which is meant to protect them.

The recent incident of a family of four travelling on a two wheeler has gone viral. It shows the careless attitude of the father allowing his young daughter to control the two wheeler while an even younger chold is being balanced between his knees. The video was shot near Lulu mall in kochi, Kerala.

It may be noted that apart from the father, none of the others sported any sort of protective gear. Leaving the TVS Jupiter scooter to be steered by a young child is literally putting the lives of the entire family at risk. Kerala police has been notified about the video above by alert citizens. They are now looking for the man on the scooter, who has put everyone else’s life at risk by allowing his child to ride.

UPDATE – After seeing the video, Vinod Kumar, Motor Vehicle Inspector, Kochi said, “We have suspended the licence of the person for one year and he is directed to approach the Ernakulam RTO for further proceedings.”

Helmets for riders and pillion riders are mandatory and all persons flouting these regulations will be fined as per new rule. Car drivers without seat belts were also fined Rs 100. Penalties for other traffic violation have also been imposed but it is apparent that these rules are blatantly being ignored by the general public at large. 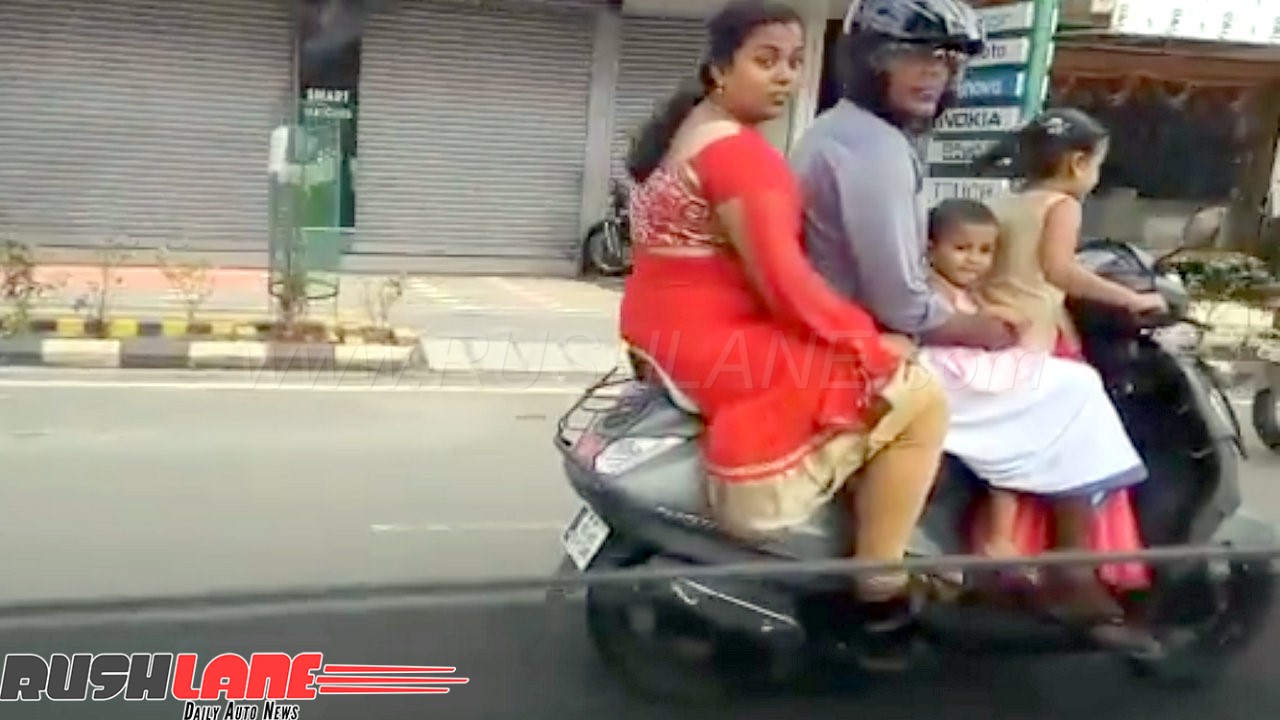 Despite these regulations, awareness drives and fines imposed on offenders, the our cities has seen a notable rise in road accidents. As per data collected there has been a stark increase in deaths on our roads as compared to 2016. Bad roads is also a reason for this increase. In 2017, everyday 10 people died in accident due to bad roads, while in 2016 the number was 6 deaths per day.

Investigations into the causes of most these accidents revealed that they occurred due to human error. It is usually seen that bad road conditions and wrong traffic signals are to blame but reckless driving, flouting of traffic regulations and not paying attention to personal safety are as much the cause such calamities on the road.

A survey conducted by Ashutosh Atre from Road Safe Foundation revealed that 8-0% of accidents occurred due to negligent driving and human error while only 2-3% were due to potholes and unmarked speed breakers. This includes situations where under-age kids are allowed to drive or ride vehicles, as seen in the video above.