As you may have heard multiple times, 2019 was one of the worst times for the Indian automotive industry with just a handful number of brands reporting positive sales figures. Royal Enfield was definitely not in that category and had to face a sales decline of more than 17% in 2019. In fact, in all the 12 months of 2019, the company couldn’t gather a positive sales figure at least once, in comparison to the respective months in 2018.

Royal Enfield closed its 2019 sales chart with a total of 6,90,839 units; a drop of 1,46,830 units or 17.53% compared to the market performance in 2018. The month of October 2019 saw the Chennai-based motorcycle manufacturer almost at the brim of making a positive sales result while July was the worst with more than 26% fall in sales.

In the later part of the year 2019, Royal Enfield launched cheaper variants of Classic 350 and Bullet 350 motorcycles. This helped the company get a boost in sales, but overall sales maintained a decline as compared to 2018 sales numbers. Below is the detailed comparison of Royal Enfield motorcycle sales from 2019 and 2018. 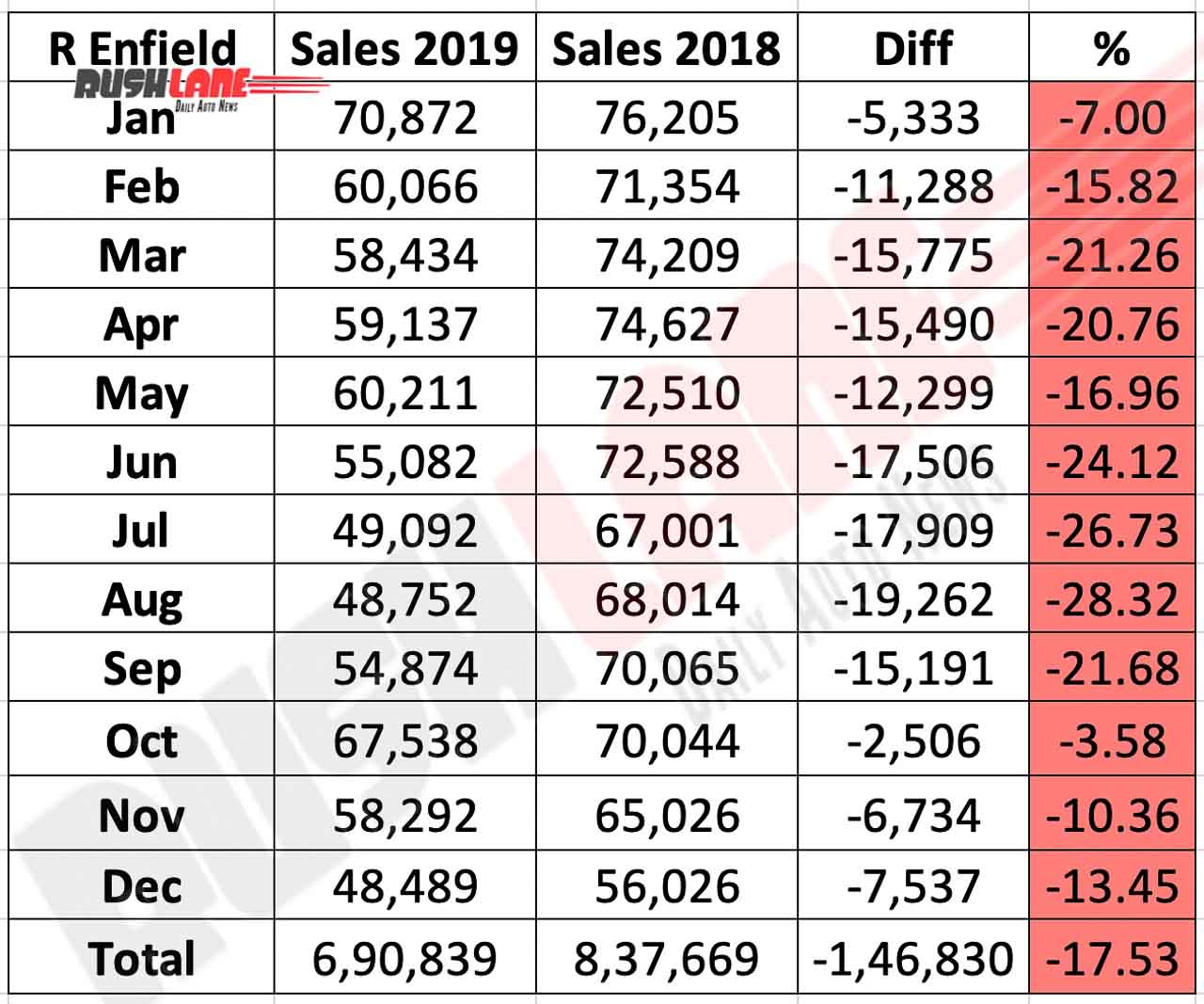 Royal Enfield is currently introducing the new BS6-compliant versions of its popular 350 range, in phases. The new Royal Enfield Classic 350 BS6 was launched only recently at a starting price of Rs 1.65 lakh ex-showroom; roughly Rs 14,000 higher than its BS4 counterpart.

The changes in the BS6 350 range mainly come in the form of a new fuel-injection unit and a reworked exhaust system. Output figures of the BS4 range stand at 19.8bhp and 28Nm of torque, and rumours claim they stay the same for the updated BS6 line. The BS6-compliant Royal Enfiled Classic 350 also brings two new colour choices: Stealth Black and Chrome Black.

Meanwhile, Royal Enfield has slowly begun the discontinuation process of the 500 models such as the Standard 500, Classic 500, Thunderbird 500 and ThunderbirdX 500. As a start, dealerships have stopped accepting bookings for the 500 line-up. Interested buyers are still able to purchase the motorcycles through the official Royal Enfield website, but we suspect it will remain active only till the existing stocks last.

Royal Enfield is also busy working on the next-generation 350 model range. The company initially planned to launch the new motorcycles before April 2020 (the deadline for BS6 implementation), but it seems the products would take more time to become market-ready.