Royal Enfield 650 Bobber based on Interceptor – Modified in Hyderabad

Royal Enfield is currently in the advanced stages of developing the third family member of its flagship 650 Twin family. The twin-cylinder cruiser was previewed by the KX Concept last year and a test mule has been spotted doing rounds recently. Meanwhile, Hyderabad-based EIMOR Customs (East India MOtorcycle Revolution) chose to execute its own version of RE 650 cruiser based on Interceptor rather than waiting for the official product to be introduced.

Called the Regale, the modified Royal Enfield Interceptor 650 adopts extensive customization. The roadster stance has been transformed into a low-slung Bobber appearance by repositioning the rear shocks, getting rid of the stock seat and replacing it with a leather clad single-piece unit.

The fuel tank gets knee pads that match the saddle in addition to tastefully executed golden borders. The black-gold color theme is extended to the custom fender and tool boxes which pay tribute to world war era ammo boxes. Watch the modified INT 650 Bobber in action, in the video below.

There seems to be no changes to the engine, gearbox, braking and suspension system. The stock Royal Enfield Interceptor 650 is powered by a parallel-twin, air-cooled 648 cc engine which dishes out 47 hp and 52 Nm of torque. The motor is mated to a 6-speed gearbox. The 650 Twin makes for effortless and smooth highway cruising. 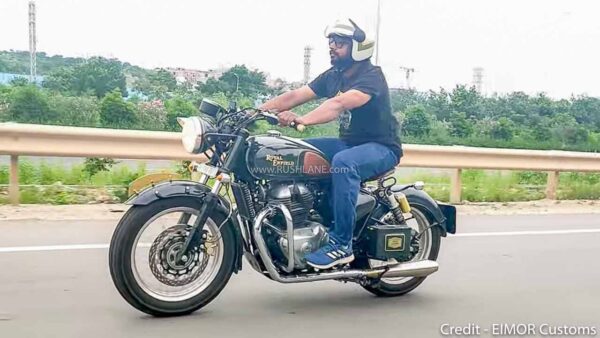 Royal Enfield is currently occupied in bringing the new generation of its 350 cc motorcycles based on the modular J-Platform to the market. The launch proceedings will commence with Meteor 350.

The 650 cc twin-cylinder cruiser is expected to be introduced sometime next year. It will be positioned to take on the locally produced Harley Davidson Street 750 but one can expect the pricing to be a lot more attractive. Meanwhile, Honda is also gearing up to introduce a medium displacement motorcycle which is most likely to be a cruiser. We will know for sure on 30th September.