The accompanying video details the stringent steps involved in first servicing of the newly launched Royal Enfield 650. The video has been created to show owners what to expect in the first servicing.

This particular RE 650 Interceptor had just completed its first 500 kms run. This is when you are required to head to the service station, for the first service. 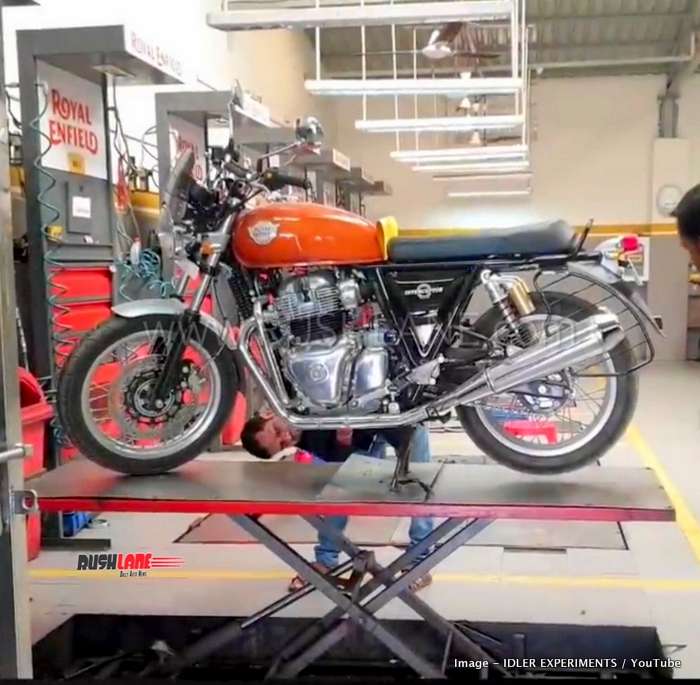 On arrival, and to justify its premium pricing and to set it apart from regular RE bikes, the Interceptor 650 was allotted a separate bay with the owner experiencing minimum waiting time at the service center. The service personnel placed the bike on a ramp, drained the engine oil, opened the seat which could be removed by releasing a knob located in the tool kit.

You can see a Mobil filter was seen which is different from a traditional filter. Even the air filter is unique on the new RE Interceptor 650. New oil filter, new engine oil and a thorough cleaning of the air filter was performed under pressurized air conditions and did not require any replacement. When the owner complained about some fine tuning, he was reassured that the current rpm was well within limits and needed no adjustment. 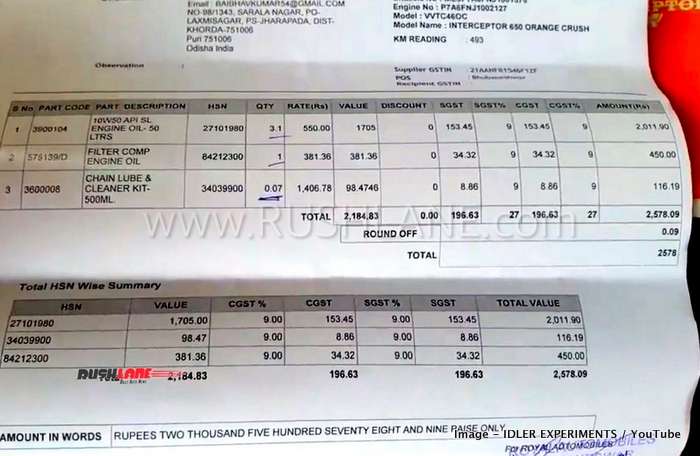 Fresh oil is put in the exact proportions as required and filter cleaned while the entire servicing is done quickly and efficiently with the owner receiving a very reasonable bill for an amount of Rs.2,578. Though this was the first free service, the owner had to pay for two consumables of 3.1 liter engine oil, a new oil filter and chain lubrication.

The next servicing is due after 10,000 kms of 12 months whichever is earlier with the owner getting a booklet of coupons to be issued with each servicing. Watch the full video below.

Royal Enfield introduced the Interceptor 650 and Continental GT 650 in November 2018. Both these bikes have noted immediate success in the country and have appealed to biking enthusiasts right from launch. One of the main reasons for this positive response is the fact that both the bikes are reasonably priced.

The Interceptor 650 and Continental GT 650 get price tags of Rs.2.50 lakhs and Rs.2.65 lakhs respectively and offer high value for money. They are powered by a 649cc, air or oil cooled, parallel twin engine offering 47 bhp power and 52 Nm torque which gets mated to a 6 speed manual transmission with slipper clutch.