In addition to unveiling the Concept KX (Bobber) at the ongoing EICMA 2018 in Milan, Italy, Royal Enfield has also showcased three interesting concepts based on the newly launched 650 twin platform. This custom one-off concept which goes by the name Midas Royale has been created by Taipei based Rough Craft.

With the Royal Enfield Continental GT 650 as a base, the custom motorcycle builder has achieved a unique two wheeler that is sure to warrant more than a casual glance. Rough Craft and Adrian Sellers, Industrial Design Manager at Royal Enfield, together designed the Midas Royale with endurance racing as its theme. 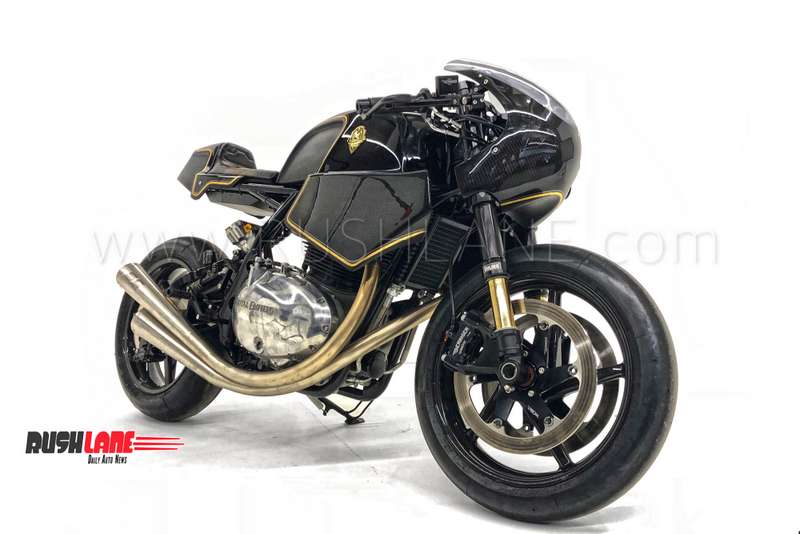 The massive chrome finished crankcase is one of the primary characteristic elements of the new Royal Enfield motorcycle and hence the custom fairing makes no attempt to conceal it. The long horn-like SC Project exhaust pipes further add to the Midas Royale’s flair.

Upfront, the aerodynamic fairing features eccentrically placed projector headlights. Most importantly, this is the first project by Rough Craft to employ 3D printing technology. Yes, the beautiful fuel-tank has been 3D printed in a single pass! The leather saddle and a typical cafe racer tailpiece with stopper round off the design. The beautiful black and golden color theme is indeed tasteful.

The Royal Enfield Midas Royale concept is equipped with Ohlins front inverted telescopic fork and an unmissable rear monoshock. The bespoke swing arm and foot controls are from HPM Racing while the braking system comes from Beringer. The alloy wheels are wrapped around Pirelli Diablo Superbike slicks. The clip-on handlebar is CNC machined.

The Royal Enfield Midas Royale’s 648 cc twin-cylinder air/oil-cooled engine is capable of dishing out 47 bhp and 52 Nm of torque. The motor is mated to a 6-speed gearbox by means of a slipper clutch. The Midas Royale concept demonstrates the Royal Enfield Continental GT 650’s versatility when it comes adopting customization.