We already know by now that Royal Enfield is developing a full-blown cruiser based on the 650cc platform which underpins Interceptor 650 and Continental GT 650. Also referred to as KX650, launch is expected next year.

Images of RE’s cruiser 650 test mule have already been out. However, before Royal Enfield launches their 650cc crusier officially, a custom-made cruiser on the same platform has already been made.

While Interceptor 650 has been a fan favourite ever since its launch in 2018, there are loads of room for improvement in order to classify itself as a tourer. Its uncomfortable seat and stiff suspension setup make for an unforgiving riding experience for long distances.

However, if it were modified into cruiser things might be different. An aftermarket customisation firm called Bulleteer Customs has modified an Interceptor into a proper cruiser and posted its images on its Instagram handle. 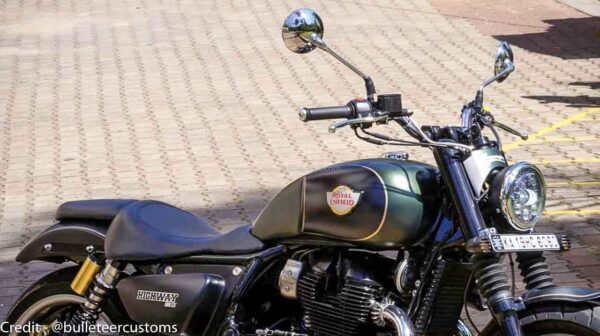 It has taken more than a year for Bulleteer Customs to complete this job, from designing to actual execution. The bike adopts a design of an authentic bobber with wide handlebars and a very low stance. Handlebars here use extenders to provide a comfortable riding position. Wheelbase has been increased by providing a slight rake to the front suspension unit thus feeling more planted on straight roads and highways.

Tyres have been upgraded from 100mm to 120mm at front and 130mm to 180mm at rear. This also lends a distinct road presence to the motorcycle. Saddle has been lowered and flattened out with proper cushioning therefore making for a more comfortable ride. The customised bike gets a split seat instead of a single piece as on the stock Interceptor. 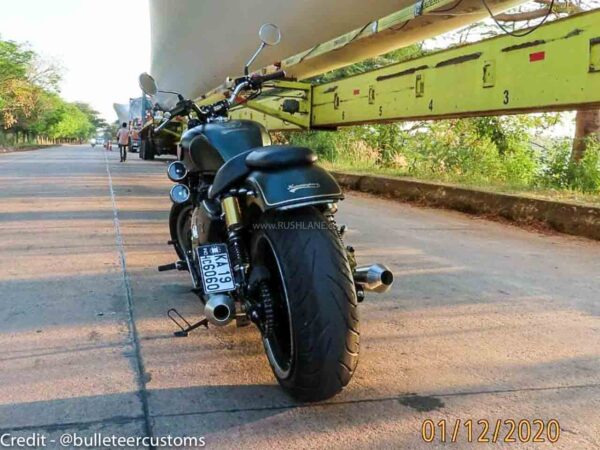 Side body panels have been changed as well, which bear the name ‘Highway’. Fuel tank is of a similar tear-drop shape however, like Continental GT, it comes with cuts on either side for a more aerodynamic look. The motorcycle wears a nice contrasting look thanks to a colour scheme of hue green and black with pinstriping used.

Engine and alloy wheels are painted in Black with a white accent matching the aesthetics of the cruiser. A different exhaust system which is more straight than being up-swept has been used.

Clearly, time and effort invested in this modification have paid off nicely and the bike looks quite tasteful. Interceptor is powered by a 648cc parallel-twin oil/air-cooled motor which gives out 47 bhp and 52 Nm of peak torque. It is mated to a 6-speed gearbox and offered with a slip and assist clutch. As of now there has been no official word from Royal Enfield regarding KX650’s launch but we expect to hear more about it in coming months.