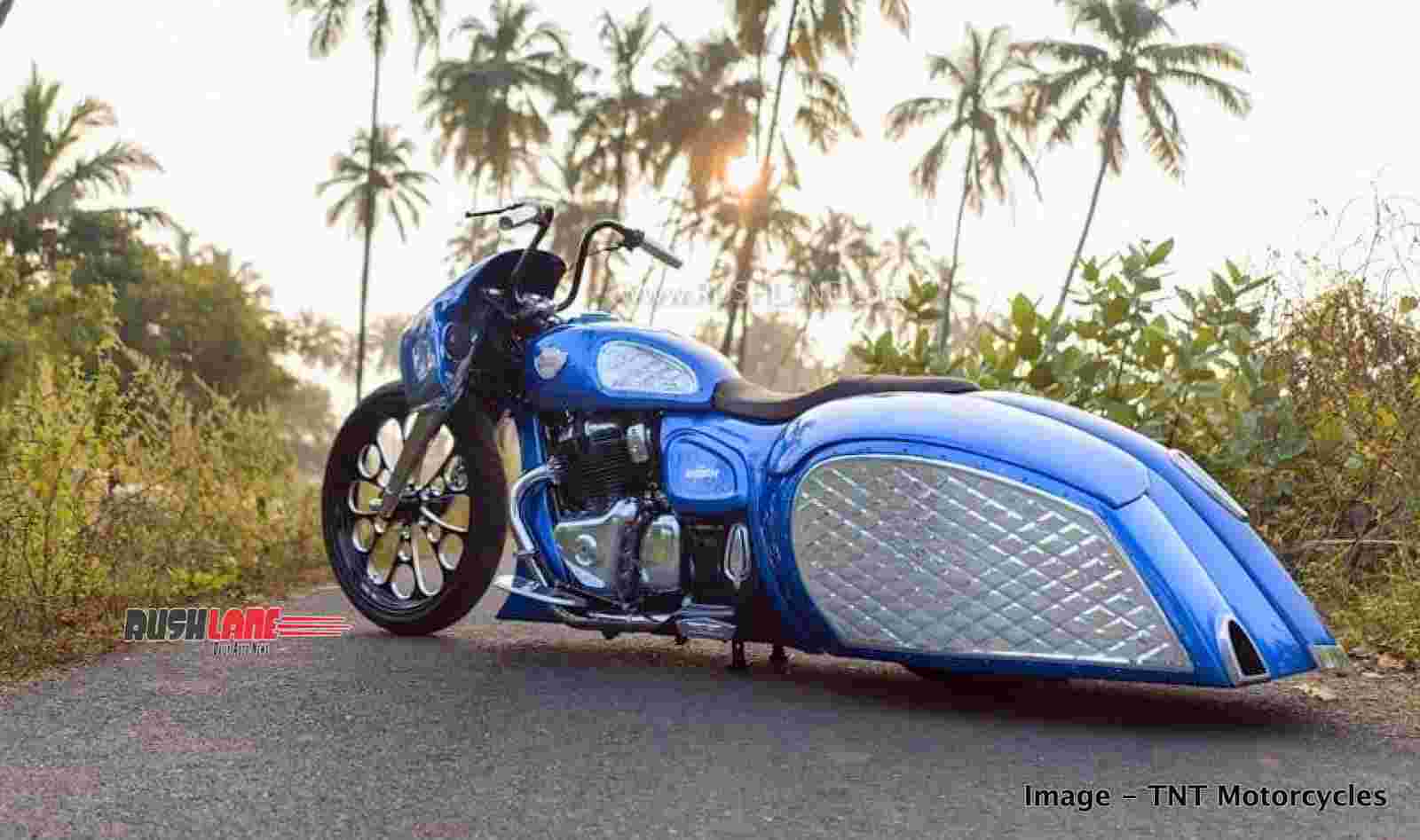 Besides the likes of reputed two-wheeler brands and their products, there were many custom builders who grabbed eyes with their unique creations. One such example is the Neelkantha by TNT Motorcycles, Delhi — a custom bagger based on the Royal Enfield Interceptor 650.

Ever since the launch of the Royal Enfield 650 Twins, Indian motorcycle enthusiasts were able to see a range of tastefully customised Continental GT 650 and Interceptor 650 examples from big names as well as smaller customisation shops. However, this is the first time we are seeing a bagger motorcycle based on the Interceptor 650.

Truth to be told, bagger motorcycles are not something of interest for every bike enthusiast, due to their arguably odd looks and weird proportions. However, these motorcycles have a certain character to them that may not be seen or felt by everyone, except by its large community and following across the world. 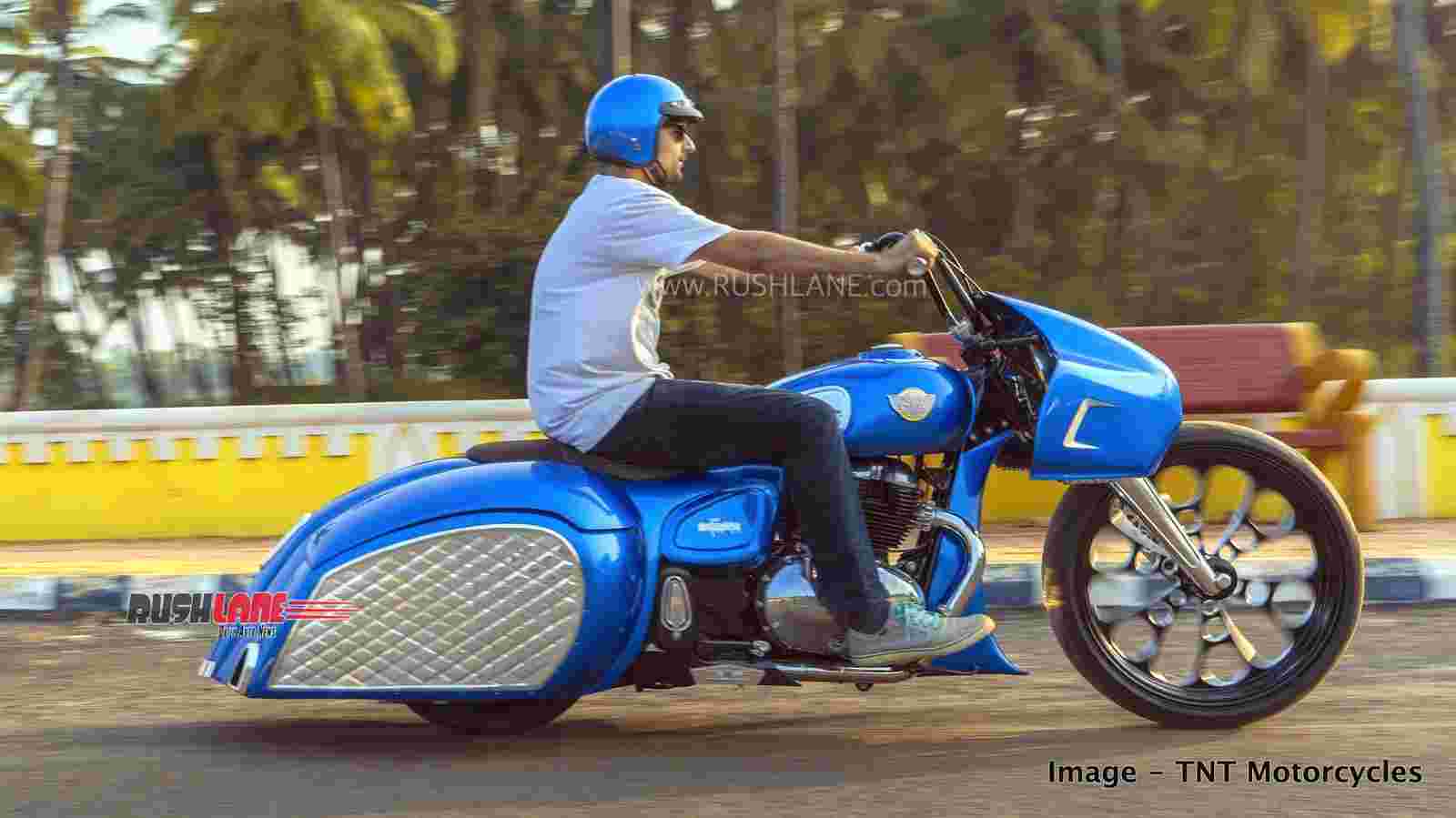 The Indian motorcycle market already has a decent portfolio of baggers, but only on the higher end. Bagger motorcycles such as the Honda Goldwing, Harley-Davidson Road Glide Special, BMW K 1600 B, Indian Chieftain, etc., have their fair share of takers and fans in the country. Still, only a few would be fans of rather extreme examples such as the TNT Neelkantha.

To start off, the design philosophy of the TNT Neelkantha has a neo-retro vibe with a lot of styling elements that break the usual custom. While the ape handlebars reach up, the cowl droops down into the wheel (what easily looks bigger than 25 inches). 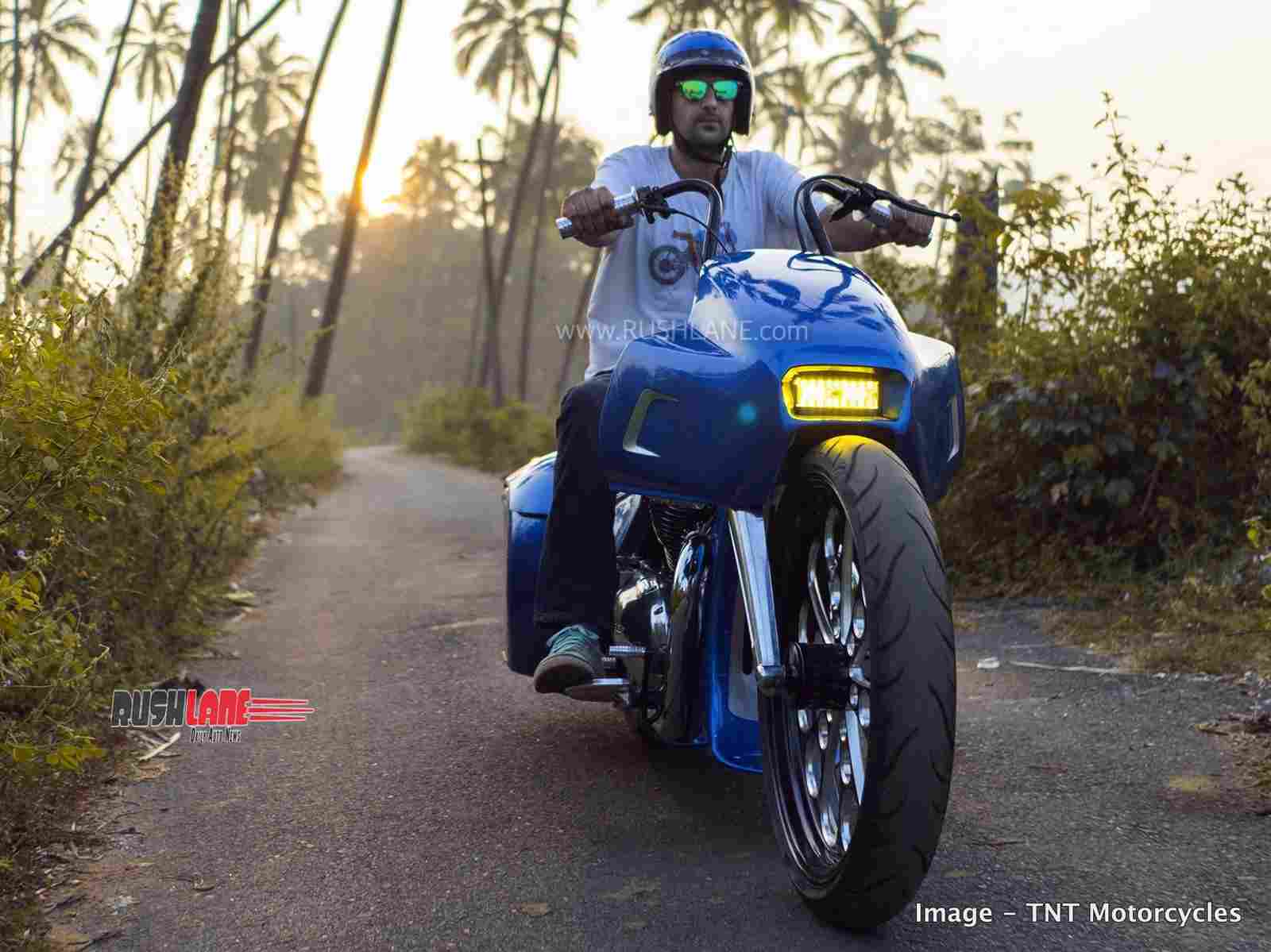 In typical bagger fashion, everything from the triple clamp flows smoothly down to the rear; flanked by two large saddlebags that take up the entire rear wheel housing, throwing some light on the origin of the term, ‘bagger’. And in typical ‘extreme bagger’ fashion, the Neelkantha sits exceedingly close to the ground and is a far cry from being a practical choice.

The metallic blue paint shade is quite pleasing to the eye and is further accentuated with the chrome/silver highlights spread throughout. The front wheel-spoke design and tapered forks have a questionable functional advantage or form-taste. Braking duties are reserved only for the rear. The brake pedal – footrest combo is a common sight found in cruisers and baggers.

Being a one-off custom motorcycle, the TNT Neelkantha does not follow any road regulation. Hence, it misses out on indicators, mirrors and some other essentials such as a front braking unit. The dual exhausts are functional thanks to the 650 Twins’ stock dual-pipe setup. The 648cc parallel-twin engine promises decent performance and is good for 48bhp and 52Nm, while mated to a 6-speed transmission.

Overall, the TNT Neelkantha is certainly an interesting piece of work rather than being the best at what it is. Employing the 650 Twin motor has boosted its appeal since a large majority of Royal Enfield customisations are still based on the single-cylinder 350cc or 500cc UCE units.