Royal Enfield Interceptor 650 and Continental GT 650 will be first launched in California between 22-25 September. This will be followed by its launch in India just ahead of the festive season in November.

The much awaited 650 cc motorcycles from RE, were originally planned for launch in early 2018, but plans were put on hold so as to minimize delays in delivery and enhance quality standard. 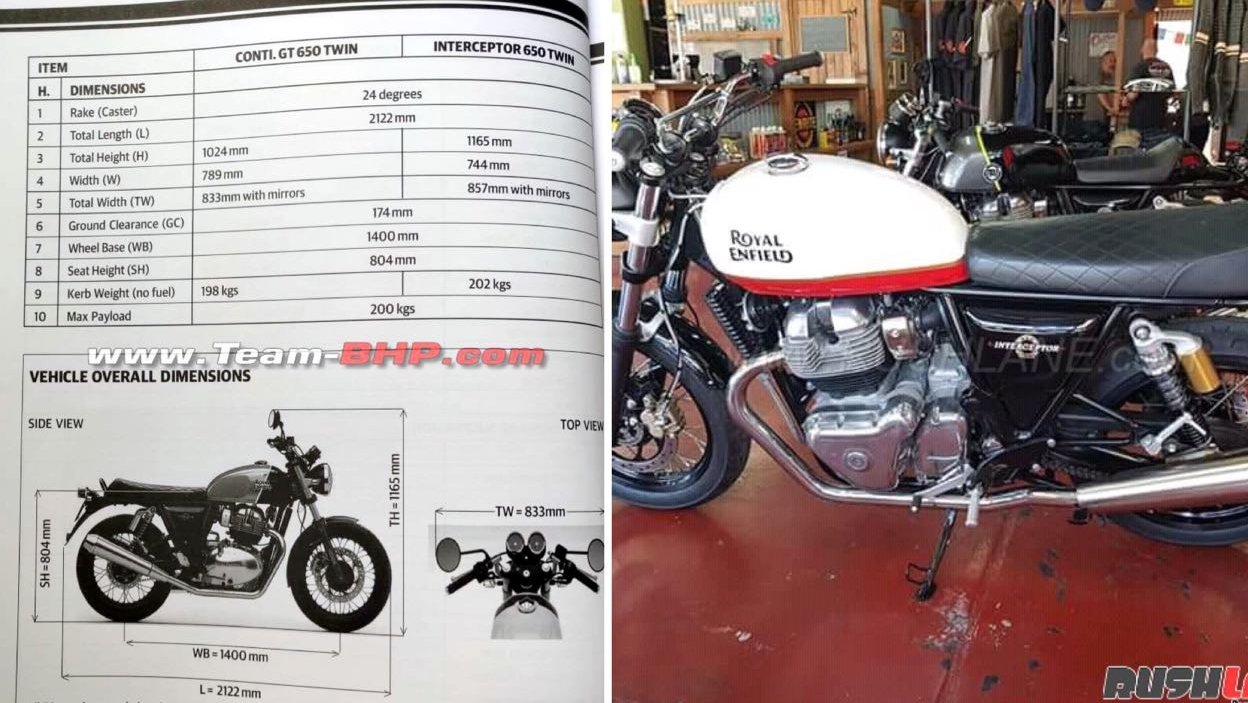 Now ahead of official launch, specification sheet of both the motorcycles has leaked online. Thanks to Team BHP member Sarthak Singh, who managed to get a copy of the service training manual. As per the leaked info, Royal Enfield Continental GT 650 will have a kerb weight of 198 kgs, and the Interceptor 650 will weigh 202 kgs. Both bikes have load carrying capacity of 200 kgs.

Royal Enfield Interceptor 650 is a retro styled motorcycle while the Continental GT 650 is a café racer. In terms of design, though both bikes are strikingly similar, the do differ to some extent with the Interceptor receiving handlebars positioned in such a way so as to ensure an upright seating position for the rider. 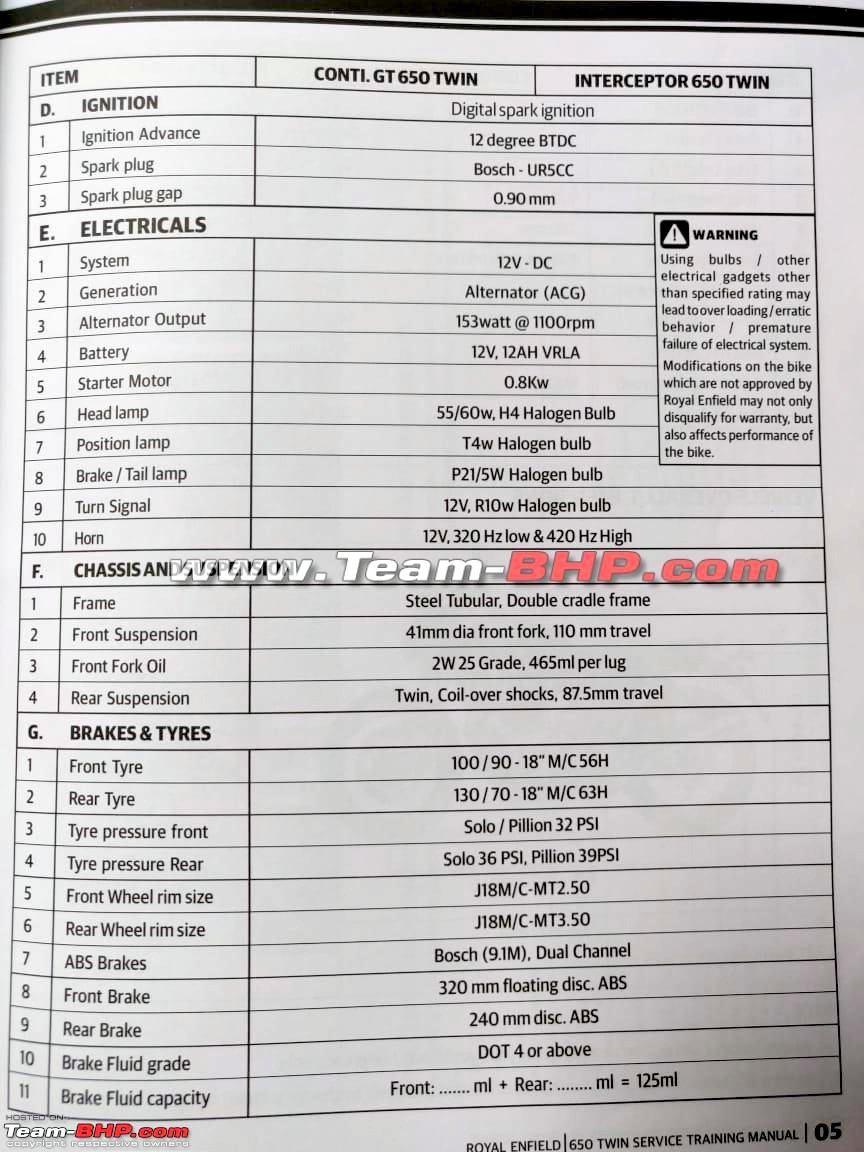 GT 650 on the other hand gets low set clip on handle bars. The chassis by Harris Performance, a subsidiary of Eicher Motors, which is so designed to enhance agility and ensure better handling dynamics. 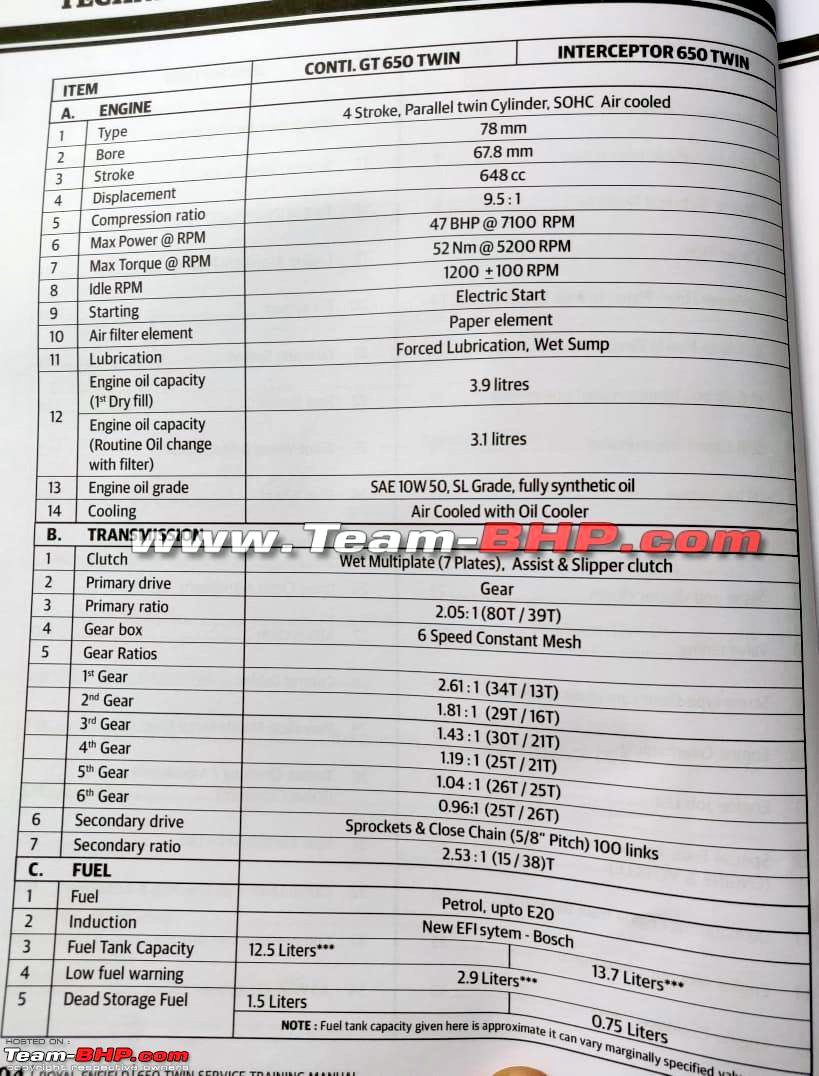 The biggest Royal Enfield engine till date, has a dry fill capacity of 3.9 liters, and refill capacity of 3.1 lites. There is no LED light on the motorcycle. All are halogen lamps. Only Electric start is on offer, no kick start. Fuel tank capacity is 12.5 liters for Continental 650 and 13.7 liters for Interceptor.

Royal Enfield Interceptor 650 and Continental GT 650 get their power through a 650cc, parallel twin, oil cooled engine which has been developed in-house from the ground up. This EFI engine is capable of 47.7 PS power and 52 Nm torque mated to a 6 speed gearbox which is also a first to be seen on a Royal Enfield model. Pricing of both bikes are slated to be between Rs 3-3.5 lakhs allowing the Royal Enfield twins to compete favourably with others in its class.