Vehicle thefts are getting more brazen by the day. Earlier, vehicles used to be robbed at obscure places, during the night and under masked faces. However, thieves are getting more daring and the most recent incident even happened at a dealer showroom.

The incident occurred at the Royal Enfield showroom in Jafferkhanpet in Chennai. The thief made an initial visit to the showroom. He arrived with a friend and when the showroom officials did not allow the friend to accompany him on the test ride, he left the friend waiting in the showroom and took the bike for a test. He failed to return the bike and the friend was detained which forced him to return with the 650 Interceptor. 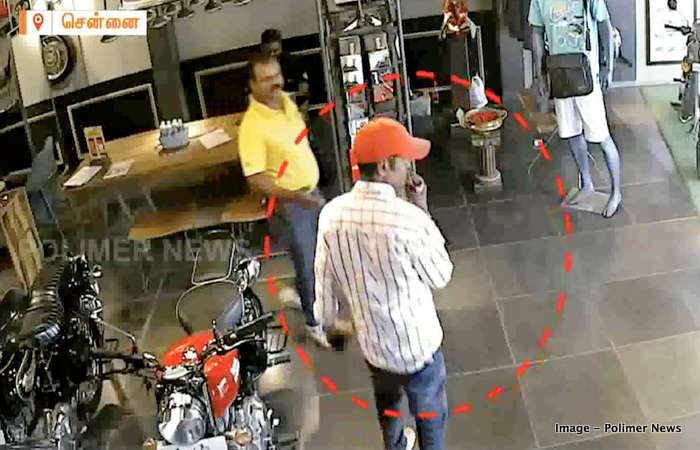 Having failed in his first attempt, the thief made one more try to get an Interceptor 650 for free. This time it was at another Royal Enfield showroom at Chromepet in Chennai. This time round the friend did not accompany him and this time he simply rode out with the Interceptor for a test ride and did not return.

A hunt is on for the thief and CCTV footage both at the company showroom and surrounding areas are being scanned for any clues of the absconding thief. The CCTV footage clearly indicates that the rider in a checked shirt and cap took the bike out of the showroom alone.

The usual practice at company showrooms is to retain an identification document at the time of test ride while most showrooms also send an employee along with the rider for the test. It is obvious that the RE showroom in Chromepet did not follow either of these two safety norms which would have guaranteed the return of the Interceptor. No GPS tracking device was also installed which will make it all the more difficult for the cops to track down the thief.

Royal Enfield 650 Interceptor and Continental GT are two models which were launched in India at the end of 2018. The two bikes have a production capacity of 2,500 units per month, currently command a waiting period of 3-6 months. This has forced RE to increase production up to 4,500-5,000 units per month from the end of this month and bring down waiting period. The Interceptor 650 is priced from Rs 2.5 to Rs 2.7 lakhs while the GT 650 is priced from Rs 2.65 to Rs 2.85 lakhs.