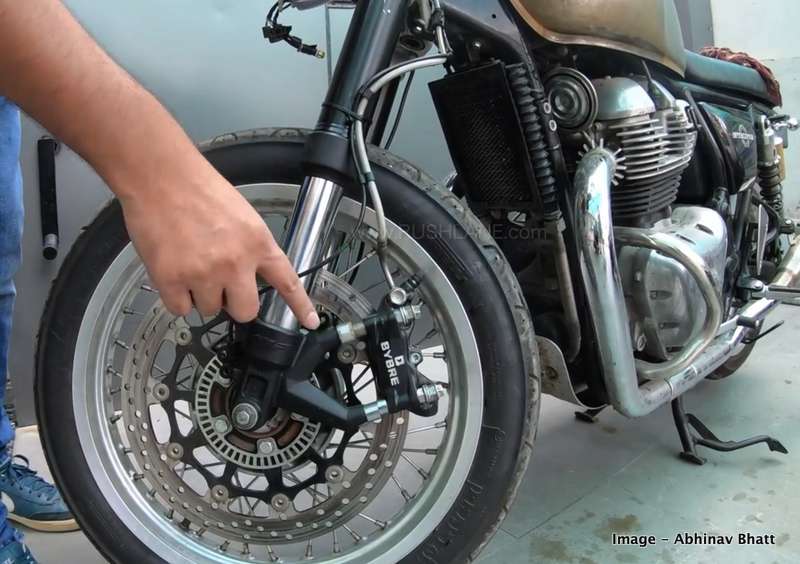 Some owners of Royal Enfield 650 Twins have complained of the bike not being stable at higher speeds. In order to solve this issue, one owner has come up with a solution. Abhinav Bhatt of Gurgaon based Speed Monks has tried to improve the high speed stability of his 650 Twin by installing USD forks of KTM Duke 390.

Abhinav borrows the 43mm upside down forks from the KTM Duke 390 and fitted it in place of the softer telescopic suspension set up seen on the Interceptor 650. He had initially tried to install the front end of the BMW G310R but found that its t-stem on the lower clamp was too short and did not fit perfectly onto the neck of the Interceptor.

Even this suspension from the Duke 390 onto the Interceptor is not a perfect fit as the bike itself is lighter than the Interceptor 650 and hence the suspension has been designed for a lighter model. Watch the detailed video below.

The owner says that it is a work in progress and hence the modifiers are still working on adding some progressive springs which would be ideally suited to the weight of the bike thus allowing it to take on rough road conditions with ease.

Apart from this modification, Bhatt has also added a single piece aluminum handlebar made of lightweight material. The fuel tank has been stripped of all colour, to allow for a more retro look. Clutch and brake levers are of aluminum while the modifiers are still on the lookout for progressive springs, so that the bike can be more responsive in terms of braking.

The modifiers plan to paint it with a grain lining and clear coat so as to give it an old school retro stance. Even the wheels are going to be changed to 17” rims at the front and rear with 120 section tyre in the front and 160 tyre at the rear.

These are currently under production in Mumbai and should be reaching the modifiers later this month. Still to be completed, the Royal Enfield Interceptor 650 which has been under modifications for the past three months will be completed in the days ahead so that the owner can ride in the rains.