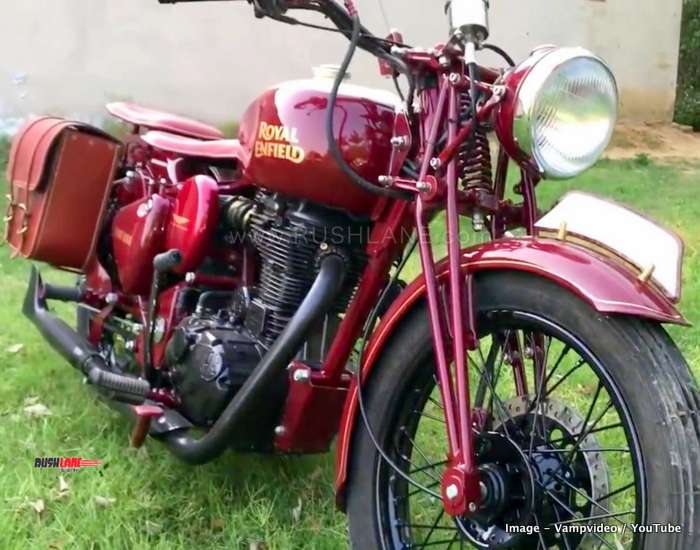 With retro in vogue, motorcycle enthusiasts are pushing the envelope to create truly unique and fascinating machines. In one such modification project, Royal Enfield Electra (which has now been renamed to Bullet) has received a complete makeover and is transformed to look like The Flying Flea of the 1940s.

The 125 cc Flying Flea or Royal Enfield WD/RE was manufactured at the time of World War II. Used by British War Office, Flying Flea was a lightweight bike that could be carried in gliders or dropped from a parachute. It was primarily used by troops to pass messages and signals at locations where radio communication was unavailable.

To achieve the Flying Flea look, a number of modifications have been carried out on Royal Enfield Bullet 350. One of the most prominent changes is at the front, where the standard telescopic forks have been replaced by a girder-type suspension. The unit comprises dual converging rods at both sides with a single spring at the centre performing the suspension duties. To accommodate the girder suspension, headlight has been pushed forward and speedometer has been placed on top. Ammeter and high-beam/low-beam switch have been mounted on top of the headlight unit.

Another important modification that has helped achieve the retro look is the classic flat seats and saddle bags. These are made from leather and come with rugged white stitching. Both are done in maroon colour, which matches the paint colour on the body.

Other key modifications include custom exhaust unit with shark fin tip, teardrop tank with increased fuel capacity, gloss black finished spoke wheels and engine, and broad and comfortable handlebars. Aural experience has also been elevated with the custom exhaust unit. It has a throaty, pulsating tone, which seems better than the stock version.

Original Flying Flea utilized a 125 cc engine and had a small, simplistic profile. As modified Royal Enfield Bullet continues using the 346 cc engine, it looks a lot beefier than Flying Flea. According to the bike modifier, it takes an average of around two months to complete such customization projects. Assistance is provided to get necessary approvals for modifications from RTO, wherever possible.