Royal Enfield is almost ready with the next-gen ‘UCE 350’ single-cylinder range, which starts with the much-awaited Meteor 350. It is essentially a replacement to Royal Enfield’s phased-out BS4-compliant Thunderbird 350 and 350X siblings. The Chennai-based motorcycle manufacturer is working on another product called Hunter 350. Both motorcycles use the same power plant that supposedly features OHC (Overhead Cam) instead of the present tappet-valve arrangement.

Royal Enfield initially planned to launch the next-gen ‘UCE 350’ lineup around the time when India shifted to BS6 emission norms. However, various hiccups made the brand update the existing ‘350’ models to BS6 specifications. On the other hand, the higher ‘UCE 500’ models were discontinued in BS4 format due to poor demand. They are still manufactured for exports. The Classic 350 continues to be the bestseller in Royal Enfield’s domestic portfolio.

Over the months, we have shared multiple modified Classic 350 examples. Unlike the range-topping ‘650 Twins’, the Royal Enfield Classic 350 (or any other ‘UCE 350’ model) may not be the best option to attain a decent balance between enhanced looks and healthy performance. 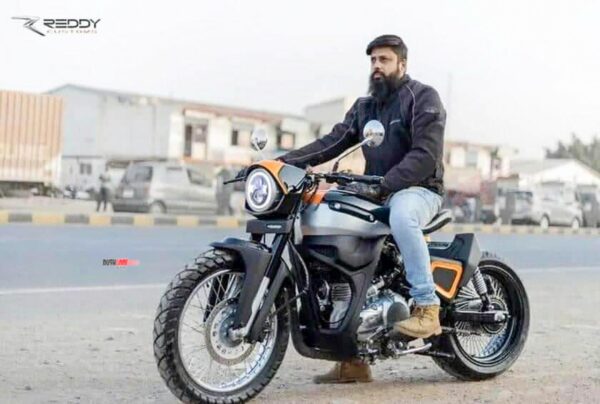 Chakan-based automotive customisation company Reddy Customs has created an interesting neo-retro motorcycle over a Classic 350 BS4. Dubbed ‘Gangster’, the modification follows a gloss black/orange theme alongside silver accents. Both fenders have been chopped and upgraded with custom elements. Its single-seat layout bends well with the fuel tank that packs a pair of extended shrouds.

Handlebars, switchgear, mirrors, instrument console, front forks, front spoke wheel, rear suspension and of course, the engine, are some of the few bits remaining stock. The rear wheel and tyre are bigger and wider. It is easily one of the main highlights of the Reddy Customs’ Gangster. 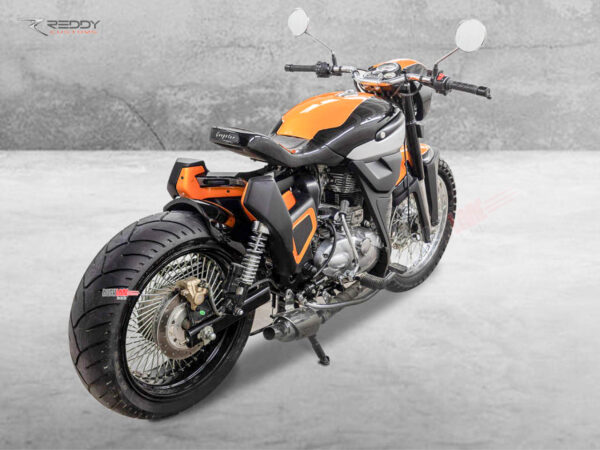 In BS6 format, the Royal Enfield Classic 350 churns out about 20bhp and 28Nm from a 346cc air-cooled single-cylinder with fuel injection. BS4 models (like the one you see here) came with a carburettor. Output figures remain somewhat identical in both instances and transmission duties are done by a 5-speed unit. One can expect a considerable bump in output in the next-gen OHC ‘UCE 350’ models.