Royal Enfield motorcycles have an unprecedented fan following that hasn’t ebbed over time. If anything, curiosity around new motorcycles and old are a tell tale sign of the level of interest Royal Enfield generates time and again. In fact, Royal Enfield is already busy trying to make the ensuing decade a strong one.

One of its core strategies will be a number of new launches for its domestic market where sales is strongest, and launches for international markets as the manufacturer is keen on gaining market share as a global mid segment bike manufacturer. The mid segment ranges from 250cc to 750 cc, and Royal Enfield already has a strong presence here. In recent times, the segment is getting a slight push from 350cc cruisers, which is turn will help build the segment, a space where Royal Enfield continues to dominate, and has for the longest time been a lone wolf in the market.

Royal Enfield Make It Yours platform

The current quarter saw Royal Enfield Meteor being launched in the 350cc segment, again a strong suit for the manufacturer. In increasing its overall appeal, Royal Enfield has never shied away from the availability of colours and accessories. The approach works well as buyers are keen to customise bikes as per personal choice.

This is further helped by Royal Enfield Make It Yours platform. The initiative lets one personalise the bike right from the word go. Such flexibility and wide range availability means takin the bike home from the dealership is a one time job rather than incorporate a personal touch as and when something becomes available. 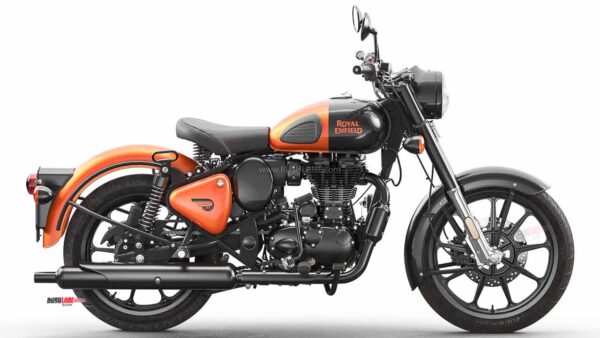 MiY helps build custom-made motorcycles as per consumer specs in 24 to 48 hours at the Chennai plant. Royal Enfield will ensure MiY is available for all its bikes at all dealerships over time. For new motorcycles, the option will be available from the beginning itself.

When introduced in October 2020, the app-based, 3D Configurator was introduced to combine colours, trims, graphics, and accessories at the time of booking. At the time, the config choice was limited to its 650 Twin Motorcycles – the Interceptor 650, and Continental GT 650. Accessory warranty stands for two-years.

Now, Royal Enfield Classic 350 can be gotten in a new Orange Ember shade, as also a Metallo Silver colour option. Bookings for the same open this week.

Available at a price of Rs. 1,83,164 (ex-showroom, Delhi), the new offerings are part of Royal Enfield Make It Yours – MiY – initiative. As announced earlier, it’ll only be a matter of time until the initiative is available for the entire RE lineup right at the time of booking.