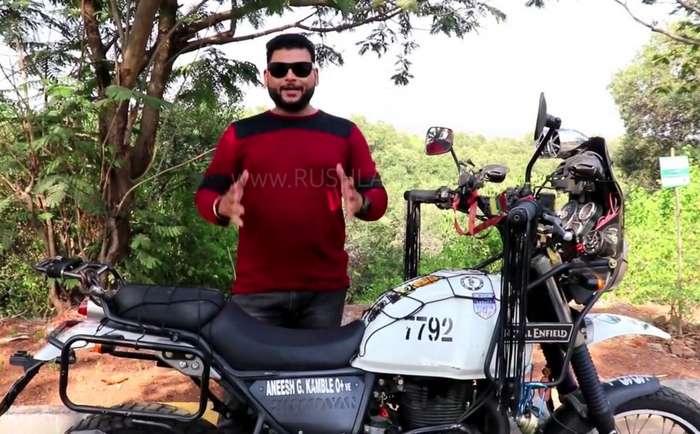 The Royal Enfield Himalayan, an all rounder motorcycle, is India’s first homegrown and most affordable adventure motorcycle. It is priced competitively at Rs 1.78 lakh for the standard ABS variant and Rs 1.80 lakh for the Sleet ABS variant.

Though there were a lot of quality and reliability issues with the motorcycle in the first 1 year, but those have now been rectified, claims the company. It has received considerable attention in India and also in global markets.

Himalayan is an off-road adventure motorcycle. But that has not stopped owners to modify the bike further / install aftermarket accessories and make it even more off-road ready. Here is one such owner, who has fully kitted up his Himalayan. The video opens with Royal Enfield Himalayan climbing down stairs with ease. It is able to accomplish that feat thanks to high ground clearance, off-road-spec wheels and long travel suspension. Watch the video by Endless Rides below.

The bike shown in the video belongs to Aneesh Kamble. He has accessorized his Himalayan in keeping with his riding persona. For starters it is the four speakers that attract ones attention. Two speakers are fitted on the top of the handle bars and two at the sides. The speakers can be linked to a mobile phone via Bluetooth with buttons for play, pause, forward and rewind. There are two separate mobile phone holders one of which is used to play music while the other is for navigation purposes.

Next on, are the leather grips on the handle bars with tassels. There is also a larger LED headlamp with a metal mesh on it so as to save the headlamp from tilting due to heavy vibrations. It is often seen that these headlamps are fitted with a single screw, which under off road riding conditions, tends to get loose causing the headlamp to hang at a precarious angle. There are two yellow auxiliary lights on the sides of the headlamp for extra illumination at night.

The horn gets modified with a switch that allows for two different sound effects. Modifications also include a leg safety guard, adjustable footrest, saddle box fitment and an attachment for a top box. There are also nets fitted on the seat and tank for added storage capacity. After market crash guards, stickers across body panels, bottle holders and a modified exhaust are also seen on the RE Himalayan.

The engine of the Himalayan stays unchanged and it continues to be powered by a 411cc, 4 stroke, fuel injected engine offering 24.5 bhp power at 6,500 rpm and 32 Nm torque at 4,250 rpm mated to a 5 speed manual transmission. ABS is offered as standard.