Royal Enfield Himalayan mod job – The most modern looking RE ever

Smoked Garage, in Bali, Indonesia, have taken the stock bike Royal Enfield Himalayan and given it a complete transformation. The bike is now called Project SG411 and has taken on a completely new look with the team spending hours and days creating this masterpiece.

Each part was customized, tested and put together to create the end result that gets a stealth fighter jet like appearance. The Himalayan was taken apart, given a new body, a different set of headlights and more beefy tyres.

Project SH411 cannot be called a modification or customization but is instead a total transformation. The motorcycle is designed in military fashion right from its paint scheme to muscular fuel tank extensions.

While no changes are made to the engine, the bike continues to be powered by a 411 cc single cylinder engine offering 24.5 bhp power and 32 Nm of torque, Smoked Garage has fitted 42mm upside down front forks from Showa in place of the telescopic front forks seen on the stock model. 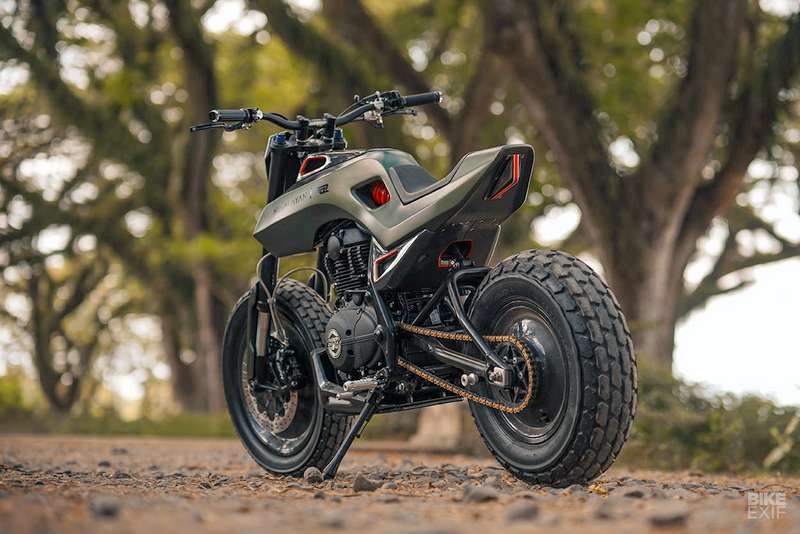 Even the monoshock at the rear is replaced by Ohlins unit with a remote reservoir and custom built swing arm. The monoshock shows off from just behind the fuel tank which is one of the most prominent design details on the custom bike. Smoked Garage has also added distinct body work, a truncated rear end and a customized free flow exhaust along with Nissin 4 piston calipers on twin floating disc brake in the front.

The now single seater customized bike weighs 20 kgs lighter than its stock model while Project SH411 gets ground clearance of 220mm and spoked wheels that make it capable for rough and rugged road conditions. This Himalayan mod job does remind of the Husqvarna Svartpilen and Vitpilen 401 which will be launched in India next year.