Motorcycle Adventures is a popular Youtube channel. It is run by a biker who has been exploring the world on motorcycles since the last 15 years. He is from Germany, and goes to different countries in the world. He has experience riding a lot of motorcycles, and probably knows which would be the best bike in a particular country.

For India, he says it is the Royal Enfield Himalayan. He says in the video that he has ridden the bike everywhere possible. This is the best bike to explore India. But, just like everything else, this bike has its own negatives. He has shared two videos on his channel, to explain his view point. 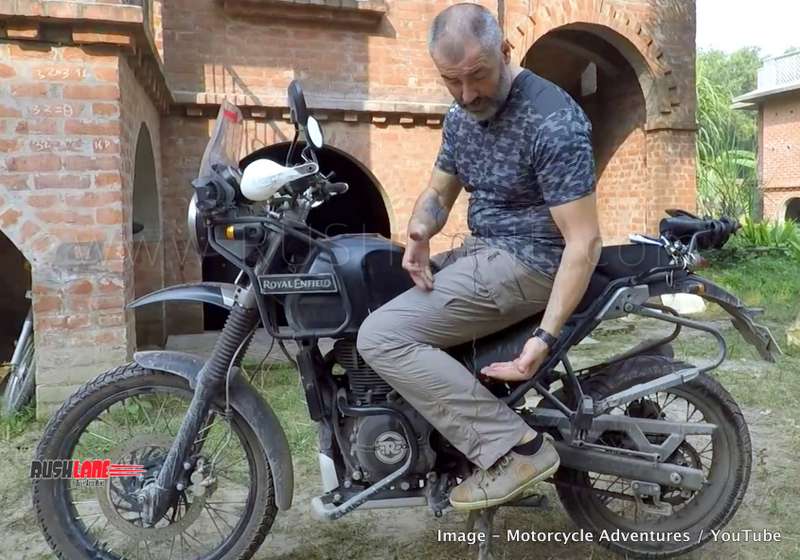 In the video he says, we have two bikes. One is a 2016 BS3 variant, the other is 2017 BS3. The bike is good. There is no doubt about that. But the built quality is pathetic. Vibrations are a lot. Parts fall off, bolts fall off, breathing pipe for petrol tank fallen, speedometer is not working, paint already fading / chipping off. Horn has stopped working. Horn wiring is very bad quality. Brake calipers need to change very often.

Ergonomic and seating position is very uncomfortable for tall riders. He says that proper riding position is when the knees are at right angle and back is straight, but that is not the case with Himalayan. It gets very uncomfortable. Tank shape is another issue. Why is there a protruding on the tank, he asks. That not only adds to the cost, but is also very bad design.

The tank edge continuously touches rider’s knee, and sometimes it gets irritating (this also results in paint chipping off). You hold the bike with your legs. The tank corners cut into your knees. We can get used to it, but that is the point. Why to get used to bad design? Instead give a larger fuel tank that will allow better bikers to not only go the distance, but will also help them control the bike better.

Below are more points he mentions in his video;
– Useless metal accessories next to headlight – they dont add any value, apart from adding 2-3 kgs to the weight. Remove it and make the tank bigger.
– Give atleast 28 mm handlebar. Himalayan has 22 mm handlebar which is not good for off road.
– Suspension should have been USD. Chinese bikes offer better suspension at similar prices, and they are not expensive.
– Suspension fork needs to be thicker, current one is not enough for off road bike
– The beak under the headlight is also pointless – adding another 3-400 grams to the weight
– Windscreen is good, but cannot provide enough wind protection
– Crash guards are pointless. They should give points on the frame to create proper crash bar – 3 point crash bar, instead of the current 2 point.
– Seats need to researched more. they are too soft. its good for 1 hour riding. after that it feels that you are sitting on the frame of the bike.

Another important point he talks about is the side stand indicator. It gets a switch to notify riders that the side stand is down. But why is the switch not cutting off the engine when biker engages first gear with side stand not lifted. Ideally the setup should be such that the engine is cut off the second biker engages first gear with side stand down. This will save the biker from getting into an accident. Royal Enfield is lucky that they are in India. If an accident happens in Europe because of this, biker will take legal action and sue Royal Enfield.

In the end he hopes that Royal Enfield takes a look at his video and understands the concerns he has shared. He maintains that the Himalayan is the best motorcycle in the Indian sub-continent for exploring, just that it needs some fine-tuning and improved built quality.