Royal Enfield models have always been a motorcycle builder’s delight. While some examples have gone overboard in an attempt to make them something they aren’t (like a Harley), there are many instances in which creators garnered an optimal balance between form and function. Thanks to the 650 Twins and their affordable and efficient base, Royal Enfield has opened new possibilities in the field of motorcycle customisations.

It is hard to go wrong on a Royal Enfield 650 build unless one has a pathetic taste in automotive styling. On the other hand, it is very easy to mess up with a single-cylinder Royal Enfield as their ‘UCE’ power plant — be it ‘350’ or ‘500’ — does not pack enough punch in modern-day standards. The next-gen UCE 350 motor, debuting in the Meteor 350, could make a considerable difference.

The single-cylinder Royal Enfield Himalayan lies somewhere in between all this. To be on the safer side, builders have not experimented anything much outside its adventure-tourer genre. The usual extreme is a scrambler. However, Indonesian architect Julian Palapa has broken this notion. He has built a tracker over a Himalayan chassis. 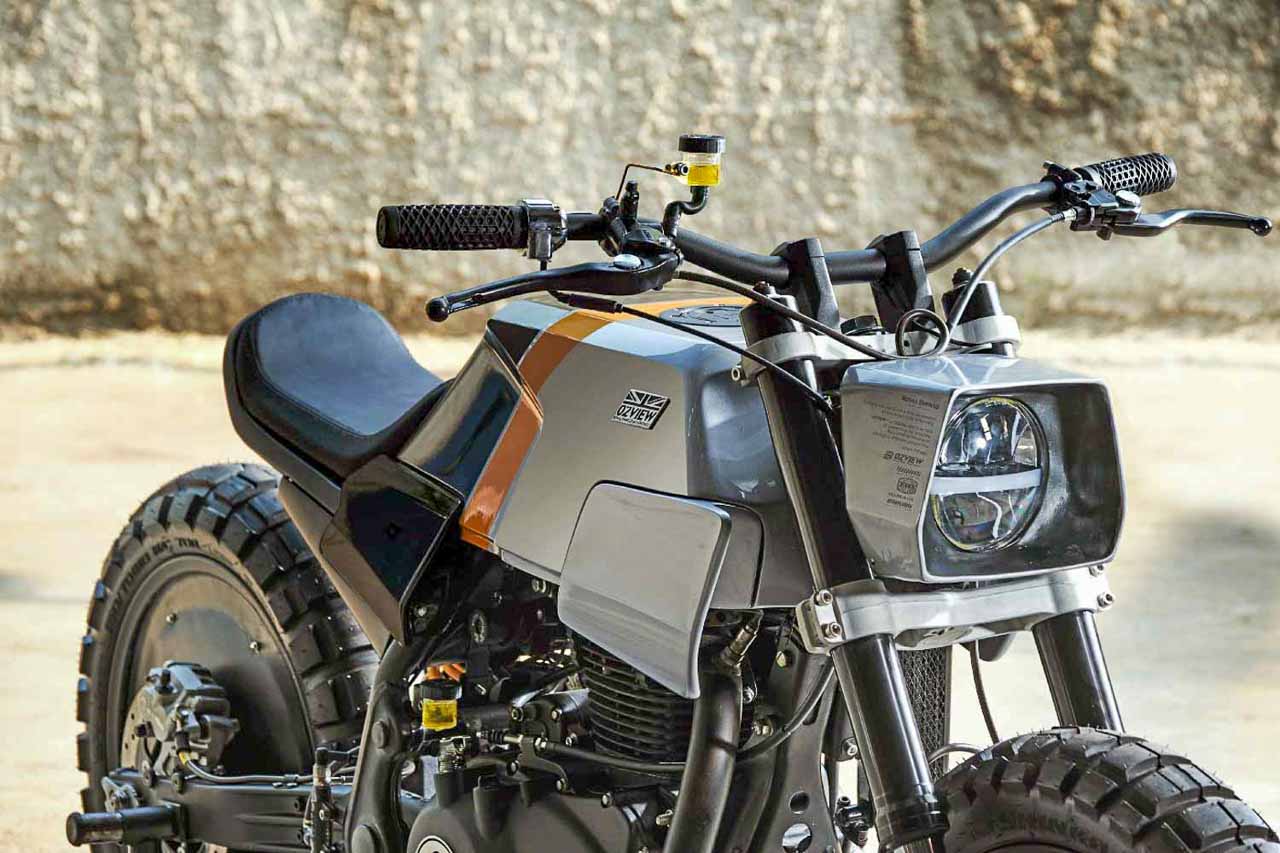 Julian calls his ‘rad’ build, ‘.02View’. It was created for a custom motorcycle building competition conducted by PT Distributor Motor Indonesia (DMI). Despite coming from an architectural background, Julian Palapa did not settle for a stripped-down direct approach to a tracker motorcycle but went all-in to achieve a neo-retro theme. Even motorcycle builders or designers with several years of experience think twice before opting such a design.

As you can observe, the ‘.02View’ is a major shift from its donor motorcycle. Besides a radical departure from the original styling, it has a lower ride height (-40mm) and wheelbase (-80mm overall length). Julian and his team had to develop a new triple-tree to attain the best handle position, and thereby, optimal ergonomics. Attention was given to three aspects: structure, function and aesthetics.

With a neat blend of matte grey, yellow and black shades, the sculpted LED headlamp assembly, fuel tank and floating seat configuration gain an interesting harmony. The suspension department was upgraded to Showa SFF USD forks and Ohlins monoshock while the stock brakes were swapped for Nissin four-piston twin-discs and Brembo two-piston single disc at the front and rear, respectively.

One finds it almost impossible to ignore the effort that went into constructing its rear section. The extended swing arm does absolute justice to the tastefully crafted rear-wheel cover (made of galvalume). Julian Palapa’s ‘.02View’ rides on premium Shinko E805 knobby or dual-sport tyres that look and work the part.

Julian states that the ‘.02View’ was not built to compete or showcase superiority. Instead, it was an architect’s perspective in creating a motorcycle. He has definitely impressed global motorcycle communities in the process.