Royal Enfield is the leading motorcycle brand, in the 350 cc segment. Their range of Classic, Bullet and Thunderbird motorcycles powered by 350cc engine, have long enjoyed a market share of 85% in the segment. But with times changing, Royal Enfield knew that they needed to update their best-selling motorcycles as the competition was trying to catch up.

Fast forward to 2020 and Royal Enfield is almost ready to launch their first motorcycle with an all new platform, and an all new 350 cc engine. This will be in the form of Meteor 350, basically the new gen Thunderbird. Royal Enfield has discontinued the Thunderbird name from its line-up, and will be replacing it with Meteor. Details about Royal Enfield Meteor 350 variants and colour options has already leaked. Hat tip to automotive enthusiast Badu Shaw and Jai Muni for sharing the spy shots.

Depending on the styling, Meteor will be offered in variants of Fireball, Stellar and Supernova. These will be further offered in a choice of 7 new colours, depending on the variant. The styling is more or less like the RE Thunderbird, but gets subtle updates.

Unverified sources tell us that the new chassis and engine deliver a smoother and refined ride. Vibrations are also greatly reduced, while acceleration and top speed numbers are now better than before. It will be offered with circular headlamps, split seat (with or without backrest), alloys, chrome exhaust, chrome handlebar, windscreen, speedometer with digital display, bluetooth connectivity for turn by turn navigation, front alloy is larger than the rear, disc brakes at both ends, etc.

Apart from the Meteor 350, Royal Enfield has planned two more motorcycles. One will be the replacement to their best-seller Classic 350, and the other will be an all new segment motorcycle, about which not much details are available, except for these latest spy shots. 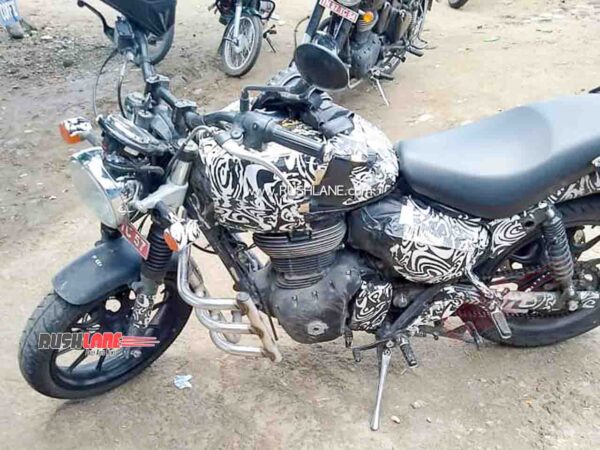 With Hunter, Royal Enfield is trying to target a new segment of buyers. Though built on the same platform, it will be lighter, probably the lightest Royal Enfield till date. It will also have a lower seat height. These two points, being lighter and offering a lower seat height are likely going to help the brand target larger number of female bikers.

Compared to the Meteor, the Hunter seems to have both alloys of similar size. It has a chrome circular headlamp, shorter exhaust, disc brake at the front as well as rear, single seat, LED tail lamps, while speedo unit is probably same as that of Meteor 350.

Speaking about the engine, from the spy shots, the unit looks similar to the unit seen on board the Meteor 350. But there are reports which claim that this new RE will have a smaller capacity engine. If that is to be believed, RE Hunter will be powered by a 250 cc single cylinder engine, and will be priced cheaper than other RE’s. Probably in an estimated range of Rs 1.2-1.4 lakh. This will allow RE to compete with many other motorcycles in the 200-300cc segment.