Royal Enfield Meteor Easy Cruiser is going to be launched on 22nd Sep in India in three variants – Fireball, Stellar and Supernova

Indian bike maker Royal Enfield gears up for the launch of a new motorcycle set to be a replacement of the Thunderbird. Called the Meteor 350, this upcoming bike is positioned on a new “J” platform. Many details regarding this upcoming RE has already been leaked. Now, another set of new information has leaked, which tells us more about its specs, as well as how the company plans on marketing the new Meteor.

Meteor 350 will be presented in three variants of Fireball, Stellar and top of the line Supernova. Each of these variants will be set apart by a series of cosmetics though all three will sport Tripper Navigation, a Bluetooth-enabled GPS system as standard.

Royal Enfield will market the M350 as an Easy Cruiser. As per the leaked marketing material, Meteor 350 is Easy as well as Cruiser. Easy because it has Easy Turning Ability, Smoother Gear Shifts, Low Cost Ownership, Refined Engine. Cruiser because it has Leant Back Seating, Forward Footpegs, Raised Handlebars, Low Seat Height.

Royal Enfield Meteor 350 engine specifications get detailed in a leaked document. It will be powered by an updated BS6 compliant, 349cc, single cylinder engine offering 20.2 hp power and 27 Nm torque mated to a 5 speed gearbox. This new long stroke engine is now an SOHC setup, and not push-rod setup like that of older Thunderbird or that of Classic 350 BS6. In comparison, this new UCE350 engine offers about 0.4 bhp more power and 1 Nm of less torque. Below are the detailed specs.

The RE Meteor 350 base Fireball variant will get two colour options of Gloss Yellow and Red. It will sport coloured decals and will miss out on some chrome accents which will be seen on the two other variants. 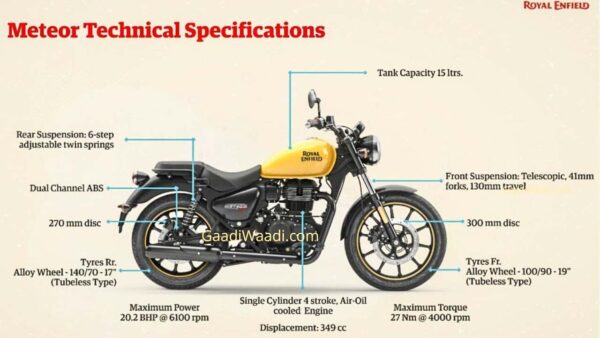 The Stellar variant is presented in colour options of Stellar Red (metallic gloss), Stellar Black (matte) and Stellar Blue (metallic gloss). It will get body coloured panels, chrome accents seen on handle bars, fuel cover and exhaust. A back rest will be an added feature for rider comfort while it will sport a 3D logo.

The top of the line Supernova trim will see two dual tone colour scheme of blue and black or brown and black. The Supernova also gets premium dual tone, machine finished alloy wheels, a revised seat cover and windscreen while it also receives chrome finished indicators.

Common to each of the variants are a semi digital instrument cluster, TFT navigation unit, turn by turn indicators and smartphone connectivity. The Meteor will be the first motorcycle from Royal Enfield to feature this level of technology. The instrument cluster consists of 8 LED signs and an LCD screen revealing information on odometer, trip meter, time, service reminder, etc. It gets a rounded halogen headlamp with an LED ring and the same feature is also seen on its tail lamp. For a more comfortable ride position over longer distances, the bike maker has fitted the Meteor 350 with raised handle bars and a back rest.

The new Meteor 350 is expected to be launched in India on 22nd Sep. No prices have been detailed as on date but estimates put the Royal Enfield Meteor 350 in a price range from Rs.1.65-1.70 lakhs. RE Meteor 350 will compete with the likes of other similarly priced motorcycles like Jawa.