Motorcycle enthusiasts have been eagerly and patiently waiting for the Meteor 350 for a very long time. Sources tell us that the launch is expected to take place on 22nd Sep. Ahead of launch, Youtube Channel Rider Lal has managed to reveal interesting new details about the motorcycle.

Meteor 350 will replace the Thunderbird 350 and Thunderbird 350X in the Chennai-based bike maker’s portfolio. The motorcycle is built upon a completely new platform codenamed ‘J1D’. Meteor will be the first of the new ‘UCE350’ range which will employ a completely new 350cc air-cooled motor which is set to be more efficient. The new generation Classic 350 is also being developed under this range.

Speaking about transmission, it is most likely a 5 speed unit. The leaked image states that the new transmission offers smooth gear shifts. Just like the engine, the clutch and transmission system is also newly developed. It has less number of parts and linkages – resulting in better clutch life and reduced friction.

From the images leaked earlier, we know that Meteor 350 will be available in three variants- Fireball, Stellar and Supernova. Each variant will feature its unique set of components which distinguish them apart. The base Fireball trim will feature a coloured rim tape, body graphics with decals, single colour fuel tank and blacked-out components. 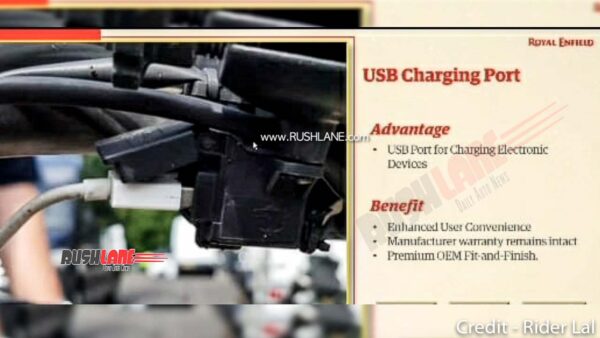 The mid-spec Stellar variant will sport chrome finish on handlebars, premium badges, body-coloured components and a backrest for the pillion. On the hand, the top-end, Supernova trim will offer a premium seat upholstery, machined alloy wheels, chrome on indicators, a dual-tone colour scheme and a windscreen. Also, standard features such as inbuilt turn-by-turn navigation called ‘Tripper Navigation’ and semi-digital twin-pod instrument cluster will be offered across the range.

Meteor 350 will be the most feature loaded RE motorcycle ever. Other features include bluetooth enabled turn by turn navigation system, USB charger for charging your devices on the go.

Along with the actual motorcycle, miniature scale models will also go on sale later this month, as official merchandise. Leaked images give a clear visual understanding as to how the bike would actually look like. There will be a total of seven colours on offer across the range- Fireball Red, Fireball Yellow, Stellar Matte Black, Stellar Red Metallic, Stellar Blue Metallic, Supernova Blue dual-tone, Supernova Brown dual-tone.