In a yet another leak of Royal Enfield Meteor 350, exhaust sound has been fully revealed

Just when you thought that there could be no more leaks about the Royal Enfield Meteor 350, there comes yet another leak. This has been the story of Meteor 350 till now, a leaky affair – pun not intended. Except the price, everything else about this motorcycle has been already leaked.

This at a time when a rival brand managed to launch a product in such a manner that almost no one had an idea what they were launching till the last minute.

Yes, we are talking about the Honda CB350; whose launch to delivery start process was so sudden; that this was probably the reason behind Meteor 350 launch getting delayed to 5th November, instead of earlier planned launch in Sep 2020.

Anyways, coming back to Meteor 350 and its leaks. The latest leaked video gives a walkaround of the motorcycle. In addition, it also reveals the exhaust sound of the motorcycle – at idle as well as while revving to higher engine rpms. Take a look at the video by GreenFish TV.

The Meteor 350 Supernova variant in the video is seen in dual tone finish of Brown and Black. The exhaust sound at idle has the iconic thump, for which the Royal Enfield motorcycles are known. But when the throttle is turned and revs are increased; it seems that the thump disappears and what you get is a motorcycle sound like most single cylinder motorcycles – and without the thump.

Royal Enfield motorcycle exhaust sound had the thump because of the push-rod engine setup along with longer stroke. Now with the new gen engines on board the Meteor 350; it is reported that the push-rod setup is no more. Instead, what is employed is most likely an SOHC setup and shorter strokes. 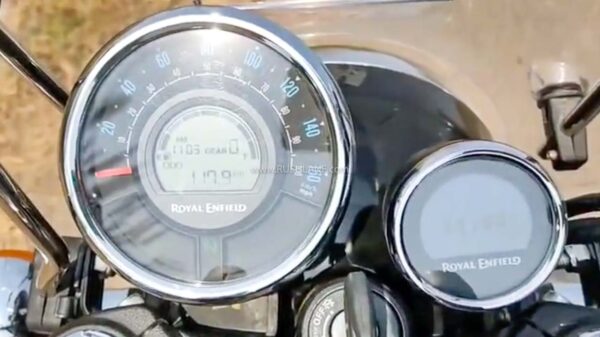 What this does is reduces the vibrations and delivers a much smoother ride experience. It also delivers better performance and throttle response. But at the same time, has probably caused reduce in the thump effect at higher revs. Will this disappoint RE fans and buyers, only time will tell.

The upcoming Meteor 350 and Classic 350 is based on the Chennai-based motorcycle brand’s new ‘J’ architecture. This means the overall mechanical packaging would be slightly different from the current model.

From the spy images, it is evident that the 2020 Royal Enfield Meteor BS6 gets a redesigned headlamp unit, an updated semi-digital instrument cluster and a reworked handlebar design. Towards the rear, the fender and tail lamp have undergone changes as well. The split-seat configuration has been tweaked a bit to provide better ergonomics and pillion comfort.

Owing to the mechanical changes required to cut down emissions, the engine casing is noticeably different from the current UCE unit. To improve efficiency, new FI system is employed. The engine misses the kicker as well. Overall, the changes are subtle to the eye, but well-rounded to provide a better riding experience. Price of Meteor 350 will be revealed at launch on 6th Nov. Exp price range is Rs 1.6-1.8 lakh, ex-sh.