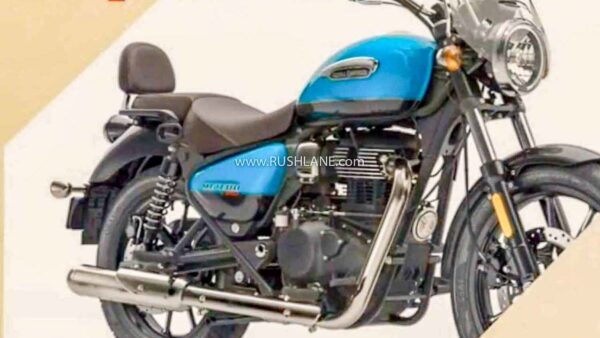 Eagerly awaited by Royal Enfield fans, Meteor 350 launch has been delayed yet again. This new gen Royal Enfield motorcycle was supposed to be a replacement to the Thunderbird range, which was discontinued ahead of BS6 implementation. Minus the Covid-19 situation, the Meteor was planned for launch in April 2020. But pandemic struck and plans were derailed.

Next reported launch date planned, was sometime in 3rd week of September 2020. Brochures had already leaked by then, revealing all information. Dealers were given detailed seminars over web. But then out of nowhere, came Honda Motorcycle India. Just when RE was all set to launch Meteor 350, Honda teased a cruiser motorcycle.

And in a few days time, Honda launched their Royal Enfield rival, Highness CB350. No one was expecting Honda to launch this. There were rumours, yes. But a proper Royal Enfield rival from Honda, was expected to be more of a dream, than a reality. From first teaser to official launch, it was all so fast that not only fans, it seems that even Royal Enfield has been caught offguard by this move from Honda Motorcycle India.

Is Honda CB350 the reason why Royal Enfield has not launched Meteor 350 yet? We will never know the real reason. What we do know, is that the launch of Royal Enfield M350 has now been delayed yet again. Economic Times report states that the launch is now pushed beyond Diwali 2020, that effectively is end of the year 2020.

As per the report by ET, the reason for delay in launching RE is supply chain issues. Also, Royal Enfield is developing a new smartphone app, called MYO – Make Your Own Royal Enfield. They plan to launch the app along with the launch of Meteor 350. This explains, the leaked multiple customized editions of the Meteor 350.

RE’s official reponse to ET – “The company reviews and revises plans based on strategic considerations and market conditions. Beyond this, we cannot comment on speculation.

Royal Enfield Meteor 350 will be offered in three variants – Fireball, Stellar and Supernova. Each of these variants will be distinguishable by their colour, body graphics, and list of features. For example, the top-spec Supernova trim will be equipped with dual-tone colour scheme, chrome indicators, machined alloy wheels, premium seat upholstery and a windscreen.

The current range of Royal Enfield motorcycles have already been updated to comply with BS6 emission norms. However, Meteor 350 will get a new BS6 engine that utilizes an SOHC setup. In comparison, the current 350 cc engine comes with the older push-rod tech.