Onam celebrations have brought joy to 1,000 Royal Enfield customers with the support of 59 dealer stores and 25 studio stores in the state

The ongoing festive season is a period of heightened activity for both, manufacturers and customers. With no room for delays in delivery, logistical support and coordination is what the dealer network relies on. With unlock of the country, buyers are back in showrooms. But this isn’t the only reason for celebration at RE camp.

Today, Royal Enfield dealers in Kerala created a record of sorts. In just 1 day, RE dealers in the state have managed to sell more than 1,000 motorcycles. This includes their popular bikes like Classic 350, Bullet 350, Himalayan and even the 650 Twins. But this is not the only joy RE dealers are celebrating.

RE is getting ready to launch a slew of new motorcycles in India, which will help dealers increase sales even further. Recently implemented BS6 transition and Royal Enfield’s longterm plans meant the brand was ready for an exiting product rejig. With Thunderbird 350cc variants no longer available, Royal Enfield Meteor is a new 350cc segment offering prepped for launch in September 2020. Variants on offer are listed as Fireball, Stellar and Supernova, and are distinctive when features are compared. The segment is one where brand dominance has long been established, with no real competition.

Active road testing has meant, other yet to be launched new bikes have already been spied. The new bike may bear the title of Hunter or Sherpa, and is expected to be a lighter offering, probably even a 250cc offering. A replacement for Classic 350cc is in the works. Expanding its 650cc bandwidth, a new 650cc cruiser has been spotted road testing. All of Royal Enfield’s new launches are aligned to the brand’s dogged determination to be a big name in the mid-segment market. 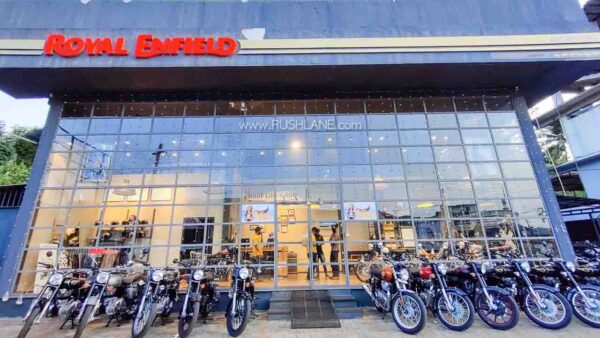 Apart from the Thunderbird series, Royal Enfield 500cc bikes too are no longer sold in the country. Sales for the latter had diminished largely in the months before they were axed, with the final straw being the decision not to make available a BS6 upgrade.The brand relies on J architecture/platform for its smaller BS6 bikes, and P architecture/platform for its 650cc offerings. Meaning both platforms are the reason we can look forward to range of new launches from the ‘oldest global motorcycle brand in continuous production’.

In recent years, the brand has revisited international opportunities, and while it continues to keep a firm grip in the 350cc domestic market, exports have increased. Given current circumstances, further complicated by Covid-19 pandemic related economic activity, overall two-wheeler sales have contracted, though most manufacturers have reported MoM growth since partial sales restarted in May 2020. Pre-orders for Royal Enfield Himalayan go underway from September 1, 2020. The Classic 500 Tribute Black version is now available as a limited offering go 1,000 units in Europe and as it brings to a close the ‘UCE 500’ air-cooled single-cylinder line.

In true competitive spirit, Royal Enfield has singlehandedly tried to reverse the pattern of big bikes being imported to India or assembled here. The homegrown manufacturer not only exports 350cc – 650cc bikes, but is focused on utilising its new platforms soon, to be more competitive across mid-segment offerings.