In yet another case of steep fines being imposed under the new Motor Vehicles (Amendment) Bill, 2019, a Royal Enfield Bullet rider has been fined a staggering Rs 35,000 for multiple violations. The case occurred at a busy road in Faridabad, Delhi-NCR. The penalty was imposed by one of the senior traffic officials, who was on duty in the area at that time.

It was a common scene that we usually witness everyday on roads across the country. Three youths probably out for a joyride on their favourite Bullet motorcycle had no clue of what was coming their way.

They probably never heard of the new rules that came into effect from September 1 or maybe they didn’t take it seriously. However, when they were stopped by traffic policemen, it was found that they have violated multiple rules all at once. 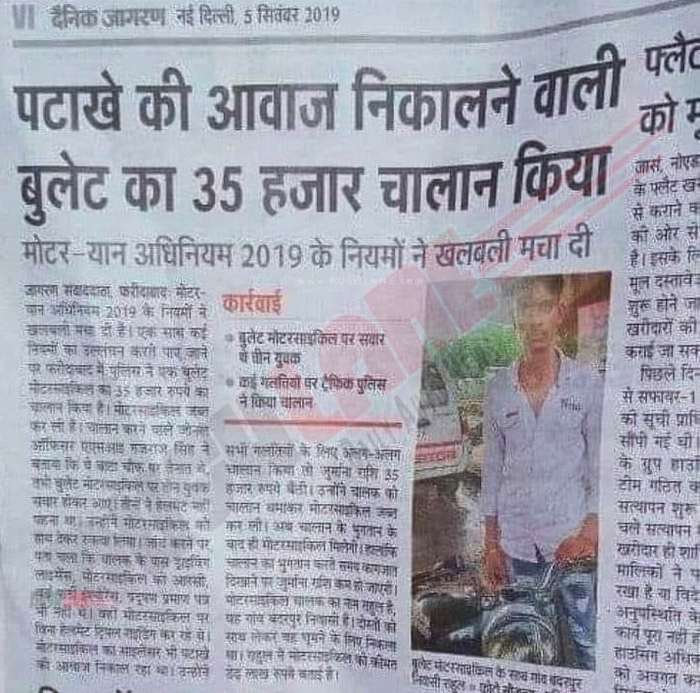 Riding triple and not wearing helmets were the obvious violations that got them stopped in the first place. On further enquiry, it was found that the rider had none of the required documents, no driving licence, no RC, no third party insurance and no pollution certificate. Moreover, the silencer of the motorcycle was also modified and was making loud firecracker like sound.

Taking into account all these violations, the on-duty officer fined a whopping Rs 35,000 penalty in total. The motorcycle has also been seized and will be released only when the fine is paid and relevant documents are shown to traffic officials. However, the overall penalty will be reduced once the rider shows all the documents.

Since September 1, there have been various other cases where people have been fined thousands of rupees for multiple traffic violations. The change has come too fast, leaving little time for people to comply with the new traffic rules. It’s not just about getting the right documents, but more about changing old habits and mind-set, which may take some time.

It would have been better if penalties could be increased gradually. For example, a 20% hike every year instead of increasing it all at once. This would have provided more time to people to comply with the new rules and the issue of steep fines could be avoided.