Dear Sid/ Rudra,
I am from Kochi, who is a harden fan of RE and proud owner of 2 limited edition RE bikes – Despatch and Pegasus. I would like to bring some of the concerns regarding Royal Enfield exclusive special edition release happened on last month. RE clearly stated that Pegasus is a tribute of world war II and will only issue 1000 across the world and 250 allocated for India, and the sale will be only online. Since I am a RE customer and fan for a long time, I was excited and keen to possess this rare special edition. I painstakingly waited for the online booking to start with lot of excitement, when it started site got crashed big time because of far too many enthusiastic RE fans were trying to book the model at the same time. So RE was forced to postpone the online booking for another date.

Again I had to patiently had to wait for the next date and also put lot of efforts and time to book the model within 3 minutes. The kind of efforts and time to procure the Pegasus was enormous but at the end I as happy because I am going to be the proud of owner of Pegasus soon. On top of it paid the premium price of 2.65 Lakhs in Kochi and was waiting for the delivery this week with all the excitement. All of a sudden I heard about the new launch from RE called –350 Signal model with ABS, when I got into the details I was shocked to figure out that Signal 350 have all the unique characteristics of Pegasus 500, even added more features into it. I understand that 350 Signal is not a special edition, RE indirectly opening Pegasus kind of model to everyone. I am so disappointed with RE’s unethical way of capturing the Pegasus market and also ditching the proud customers who already procured the Pegasus after a lot of pain and luck.

Since I am part of RE community, I am connected with quite a few people who had tried their luck to buy Pegasus during the online lot. For last 2 days the unlucky lots were contacted by RE Officials promoting the Signal 350 model stating Signal being the look alike of Pegasus.

I being the owner of another special edition of “Despatch”, and now I feel cheated being a loyal RE customer. I am also touch with many Pegasus owners and everyone feel the same.

Please let me know the reason for ripping off Pegasus so early and making us fool in front of everyone to pay that kind of premium for a ‘not a unique model’. I was contact by one of your Customer Service Executive detailing the uniqueness of Pegasus visa-vis Signal 350, but it was not convincing enough for me because when a common man looks at both models, they will not find any difference.

I would request look into this personally and address this concern immediately without any delay. Since the response from RE was not convincing enough, I am also bringing this to the notice of RE fans through social media, other traditional media channels; and keeping the consumer commission informed about the cheating. 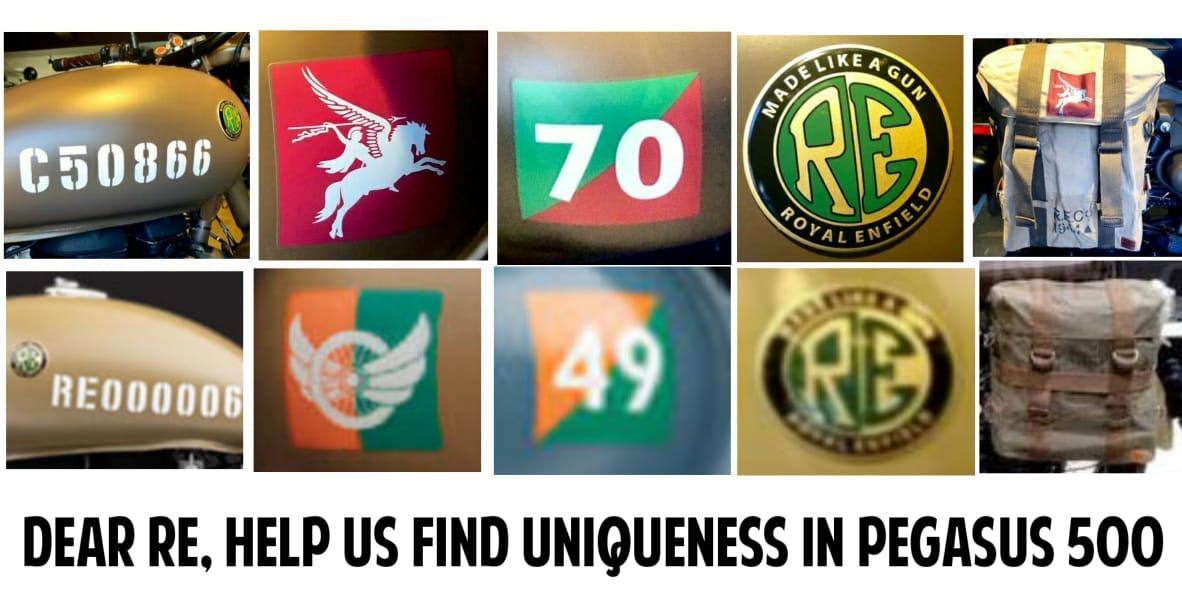 I am going to own a Pegasus with number 116 from dealer anjana bikes, kadapa, andhra pradesh. Still didn’t take a delivery. And you made us so disappointed by releasing same model regular 350 cc bikes and made us big fools. That too Pegasus without abs and 50k more than a regular 500cc . We are going to file in consumer forum. You people not even responding to our posts on social media.

Feeling really cheated. Why can’t you guys didn’t gave abs to just month before launched Pegasus. Really cheated. Also similar design. Then how Pegasus will be a special edition. Totally uninterested in RE brand.

You people dont know how much struggle we faced to get Pegasus. Firstly we waited and tried booking for July 10 and website crashed. And then no postponed booking date announcement by RE. Everyday each hour we were checking your webpage for sale date and time. At last sudden you made a sale on July 24. How many sleepless nights and with excitement we waited for the Pegasus .

Before taking delivery, you made us to go in to depression from excitement. Not everyone booked Pegasus are rich. We just booked for uniqueness and got a loans from banks to take this bike. Now I am not at all excited to take delivery.

We are expecting to take 2 decisions from your side.
Atleast callback the Pegasus bikes for abs fitment.
And give back our money which you people charged for uniqueness.
I don’t want to hurt anyone but Pegasus owners are in full disappointment.