In India, Royal Enfield’s Tribute Black 500 was the final version of the phased-out BS4-compliant Classic 500

Royal Enfield has brought the Classic 500 Tribute Black version, the last of the British-origin motorcycle manufacturer’s ‘UCE 500’ air-cooled single-cylinder line, to Europe. Limited to just 1,000 units for the entire European market, the Royal Enfield Tribute Black 500 is priced at GBP 5,299 or roughly INR 5.16 lakh. Deliveries will commence in September 2020.

On the Indian market, Royal Enfield introduced the final ‘500’ a few months ahead of the industry’s shift to stringent BS6 emission norms. The BS4-compliant 2020MY Royal Enfield Classic 500 Tribute Black was sold exclusively via a dedicated page on the company website. Bookings were confirmed by paying a non-refundable token amount of Rs 50,000 and the full price stood at almost 2.50 lakh on-road (Delhi).

Built at Royal Enfield’s Tiruvottiyur factory in Chennai, the motorcycle was available only in Classic Tribute Black shade (gloss black with gold accents). This applies to its newer UK-spec counterpart as well. There are no mechanical changes compared to the regular Classic 500 which is still manufactured in India for exports. 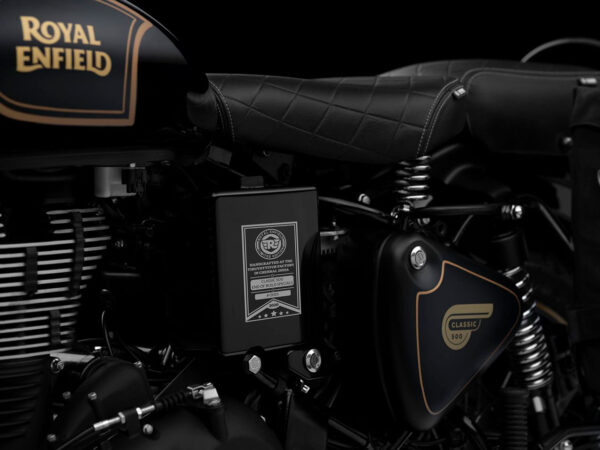 Apart from the gold pinstripes that are hand-painted by the famous Kumar brothers, Royal Enfield’s Tribute Black 500 features black quilted leather seating with white contrast stitching and certain OEM accessories such as touring mirror kit and machined oil filter cap as standard. However, the main centre of attraction is the ‘End of Build’ hallmark plaque carrying a serial number unique to each individual unit among the 1,000 allocated for Europe.

The motorcycle rides on 90/90R19 (F) and 120/80R18 (R) spoked wheels shod with tubeless tyres. Braking duties are carried out by 280mm and 240mm disc brakes at the front and rear, respectively alongside dual-channel ABS. It carries a 13.5-litre fuel tank while kerb weight stands at 196kg.

Being the country of origin, the United Kingdom has a loyal customer base for Royal Enfield products. In fact, the Himalayan and 650 Twins have already become successful ‘starter bikes’ in their respective classes.

Meanwhile, Royal Enfield is working on the next-gen ‘UCE 350’ lineup that starts with the much-awaited Meteor 350. Replacing the Thunderbird and ThunderbirdX 350 (discontinued by the end of BS4 era), the 2020MY Royal Enfield Meteor 350’s variants and colour options were leaked recently. Prices are expected to start at Rs 1.65 lakh ex-showroom.