RUSHLANEDAILY AUTO NEWS
HomeBike NewsScooters, motorcycles under 150 cc may be banned in India from April...

Scooters, motorcycles under 150 cc may be banned in India from April 2025

Indian govt is on a fast-track mode to reduce vehicular pollution. In order to do this, they decided to skip BS5 implementation, and jump directly to BS6 from BS4 – 4 years prior to its first proposed date of April 2024. At a time when manufacturers are still trying hard to meet the BS6 implementation deadline, comes yet another shocking news.

As per a Times of India report today, Indian govt is planning on banning sales of petrol engine (up to 150 cc) scooters and motorcycles from 1st April 2025. The draft also includes banning of petrol / diesel three wheelers from April 2023.

So what will be allowed to be on sale? Well, only electric options. If the draft is passed, only electric scooters, motorcycles and rickshaws will be on sale in India post the proposed date. 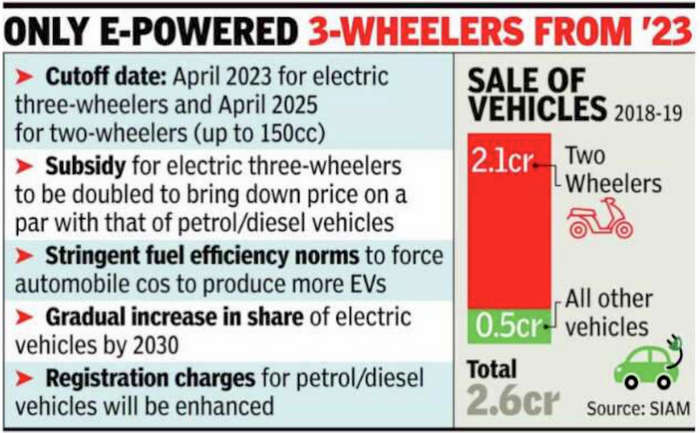 It seems to be a tough road ahead for two wheeler manufacturers in India. Almost all top two wheeler brands including the top 2 – Hero and Honda, are already battling low sales in recent months. Honda registered huge decline of 50% in March 2019, thereby losing its no 2 position to TVS for the first time since 2012. Hero too has posted double digit decline in sales.

The decline in sales is largely attributed to the current market scenario along with the implementation of GST. But that is likely to be revived once a stable govt is in power. Last financial year, India registered sales of over 2.1 crore two wheelers, which is about 10 times the sales registered by passenger car segment.

Two wheeler manufacturers are investing heavily, in thousands of crores, to upgrade their lineup to meet BS6 norms. This is the reason why govt is planning to give a 5 year window, before implementing the ban. This will allow two wheeler brands to earn returns on their investment.

Honda’s best selling is Activa 110 cc scooter, while Hero’s best seller is also 100-110 cc Splendor motorcycle. A huge chunk of sales for both brands come from the under 150 cc segment. If the new rule is implemented, there will most likely be a change in market dynamics.

But this can also boost India’s leadership in two wheeler electric manufacturing, says an official – “Our companies can take the lead as three of the four largest two wheeler manufacturers in the world. We have lagged in electrifying the car segment. India has decided to take the lead in two-wheelers and three-wheelers.”

Investments needed in order to go all electric, will be huge. As per the report, investments of the tune of Rs 50,000 crores will be made in battery manufacturing and battery storing over the next 5-8 years.