While seatbelts and toughened glass are vital safety requirements in any vehicle, these very features can be life threatening in the event of an accident. There have been cases where people have died because their seatbelt did not come off as it got jammed.

And if you manage to set yourself free from the seatbelt, it is possible that the doors are jammed. These situations make it an impossible task for people inside the car to get out in the situation of a crash, that is, without the right tools. 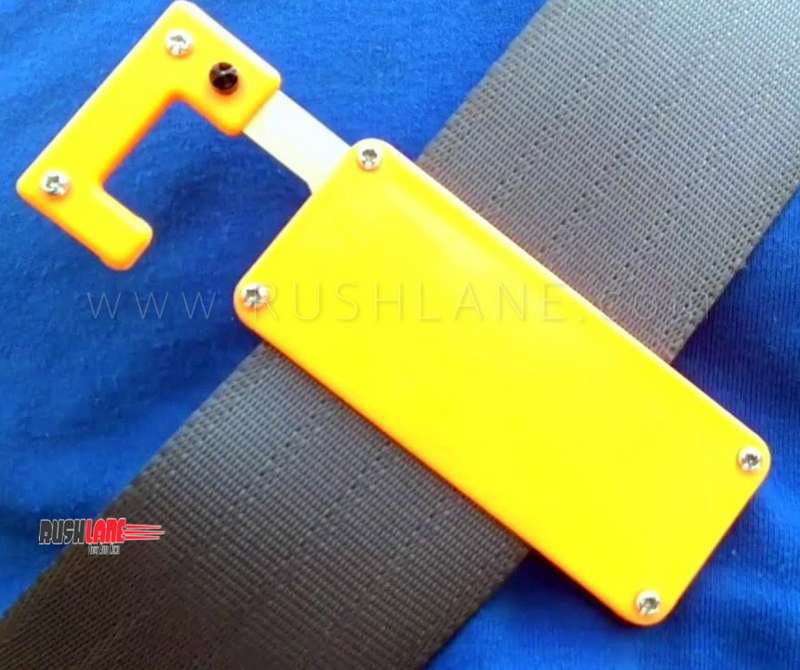 Some car owners generally keep blades, hammers, key chains with helical springs handy to get them out of such situations. However, these items are exposed to heat and moisture and get dull, dirty and rusted over time and fail to perform well in any such emergency situation.

VCAT Tools has the answer to these with a range of high quality vehicle escape mechanisms. The device is permanently installed on the seatbelt and a single pull will release/cut the seatbelt, as shown in the video below.

Despite the fact that it is permanently installed, it is secured in position to avoid any unnecessary use and does not affect the efficiency of the seatbelt. The integrated diamond glass breaker is also fitted to the glass and a single pull will break the glass allowing victims to escape. The devices are made of high quality material and ensure precision performance so that in times of emergency, they work efficiently and with the least amount of effort on the part of a user. Below are a few questions we asked the maker of this device.

RL Q1. Is it your own design or is it inspired by a similar product?
Inventor – My own invention.

2. Have you patented it?
– Yes, both design and utility patent.

3. What’s the market like for such niche products in India?
– What I found is that people want to buy these type of things but they don’t get quality and if they found it (imported products), it’s highly expensive. People don’t find a little cheap generic hammer not reliable enough and brands like resqme, Michelin, etc cost a lot for common people. In any field what most people want is a minimum viable product at the lowest price possible WHICH WILL WORK. Also i don’t want a hammer stuck in the roof of my car. It looks ugly. People never bought car perfumes in old times but air wick, Aer, etc changed this and now they are very common. Portable tyre compressors and vacuum cleaners were a niche back in the days but they are getting more common nowadays as they are getting better at their main function and prices are getting low. Thing’s like these are not niche. It’s just that they have some problems which need to be solved to make them more useful and efficient. Maybe custom engines, paintjobs, genuine leather interiors, performance enhancements could be a niche, but things like these basic accessories aren’t a niche. People just aren’t getting things good enough.

4. Are you planning to export it? If so, to which countries?
Planning to export but first have to create my foundation here. Also exporting is very tough too and will surely take some time.

5. Is it manufactured locally or by a vendor in China?
– Completely manufactured here in India. maybe screws come from china. I don’t know . I buy such things from wholesale market. rest blade, plastic, diamond, accessories etc are from Indian vendors.

6. What are the chances that a kid might playfully pull the cutter?
– It has it’s own FRIC-LOCK system. (also my own thing, totally new) It needs to be adjusted for the first time when installing. it can bear most of unintentional tugs and pulls. babies can’t pull it. All in all it will work only when you pull it intentionally. you need to pull it swiftly and hard. Btw what I tell my customers is that this is something which you’ll have to teach your kids not to do. Like you don’t allow funny business with gearstick, you don’t allow them near power outlets, similarly you’ll have to tell them that this is not something to play with. As for unintentional tugs and pulls, it can bear them. You can feel the locking resistance after installation.

7. Will the device be comfortable for drives of all gender, ages and heights since it rests on the body? Is there an alternate position to place the tool along the seatbelt rather than on the driver’s body? Is it available/suitable for rear passenger seat belts too? If so, does it include the center lap belt at the back, in terms of convenience of use?
– It was never meant to be placed on chest only. You can fix it anywhere you want on the belt. i placed that on the chest for the sake of instructions as i keep mine near the locking latch and it’d be very hard to demonstrate it there. yeah it looks good on chest (i think so) but i also accept that this positioning won’t work for females. if you ask for my personal opinion then i like to place it near the latch. you can place it anywhere. also as for rear seat belts, yes, any seat belt. the slot also accepts most of the commercial seat belt widths. That’s exactly one of the main reasons why i made this. The hammer or the keychains are at most accessible to front seats only. but this thing can be installed dedicated to every single person.

8. Is the mechanism inside the casing prone to rust or dry-up and get stuck due to the effect of AC inside the car?
– Zero moving parts. No springs, pins or that sort of stuff. I’ve tried my best for the materials. They are highly resistant to rust and corrosion. It can bear general humidity, moisture, occasional water etc but if you’ve spilled cola, coffee, beverages, etc on it then you might want to clean it up that day. Nothing can survive that.

9. Is the product certified by any agency?
– Not for now, Frankly earlier i did’nt knew which certifications to get from, Also these are very expensive to get too and not much of a help when bootstrapping. I’m working on them now as sooner or later they’ll be required.

10. What are the prospects and risks of taking this product to the commercial transport sector like buses?
– Please elaborate the question. I’ll answer what a little i understood. You can hate me for saying this but the concept is good, people are not. People don’t understand that public property is their own property. take an example of those green buses in delhi. they have automatic doors but people just for the heck of it try to obstruct doors. There are switches on vertical posts in those buses which are disabled now. If I installed this device on every seatbelt, within a week every single one of them will be cut maybe except for the driver. People value their own property more than other’s. For now i think personal vehicles are enough. According to me for commercial reasons it could be implemented in trucks, cars, lorries, taxies in hilly and snowy regions.

11. Why do you think car makers haven’t implemented an emergency seatbelt release/cutting mechanism?
– I don’t think it’d be good to answer what i think here. But still i’ll give you something from a different perspective. car perfumes like air wick etc are third party, those 12 volt usb chargers are third party (yes, some newer cars come with that preinstalled), There are some things which no matter what will always be an accessory. Also if those big brands start giving every person a 1500 rs tool or other branded good quality stuff it’ll create financial burden, and if they’ll give a 100 rs generic hammer then maybe it won’t even work in drastic times and no big company wants that. So it is good for everyone be it the companies or the consumers not to make some things standard and allow the consumers to choose them based on their own intellect.

12. What other products are you working on?
– I’m more of a like a garage inventor (20M). I’ve been making things since school times. Some were failure, some were already invented, some were very stupid. My products don’t relate to each other in general. like before this i tried to make something like a fire ball (you can find it on amazon, it is like an automatic fire extinguisher) but it was already done and also i did’t had enough resources to make it commercial like this one. i’m currently working on other things too. Maybe they’ll work, maybe won’t. I only share about what i’am working on only when i see any scope in that thing. Right now all my focus is on this VCAT V1. Maybe in future if something reaches this level of patent, manufacturing, etc. I’ll make that public.

VCAT V1 tools are available for sale on Amazon. They are being sold at factory prices with no profits. The startup is currently working on their website and brochure.