RUSHLANEDAILY AUTO NEWS
HomeEverything ElseTwo on scooter set an Audi Q5 on fire inside a society...

Yet another incident of car set on fire inside a gated society has come to light. This time in a society in Pune. Two men on a scooter, were seen pouring a liquid (most likely petrol) over a parked Audi Q5 in a gated society of Pune. Soon after they are done throwing the liquid all over the car, fromroof to bonnet to rear and tyres, they throw the bottle away.

After that, they ignite one side of the car on fire, and within seconds the entire car is on fire. The incident took place in the middle of the night, and no human spotted it. This resulted in the fire spreading on to the two cars parked next to it – a Maruti Suzuki SX4 and a Honda City. Watch the video below.

A police case has been registered by the owner of the respective cars. Local cops are going through the CCTV footage to ascertain who it could be. As of now, no one has been arrested. 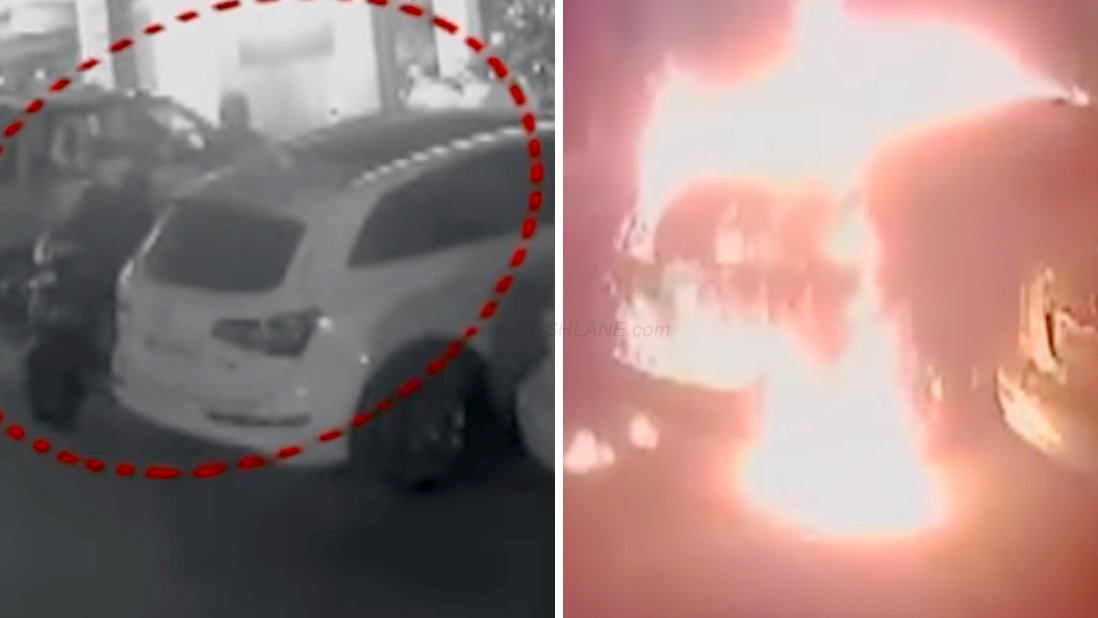 This is not a sole incident of this sort. A few weeks ago, a similar incident was reported in Mumbai. That time, the miscreants arrived in a white Mercedes ML SUV, poured a flammable liquid over the VW Vento and set it ablaze, only to drive off into the darkness leaving the burning car to be reduced to scrap.

The owner of the Vento, Rohit Mehra and his wife who reside at Palava Dombivali in Mumbai’s suburbs were spending the night at their friend’s place at Shiv Om Towers in Chandivali that night. Deep in slumber, the couple was woken at 4.00 am, with a rude shock that their parked VW Vento was set ablaze. They rushed down and with the help of the security guard and fire extinguishers managed to contain the fire, but images and a video given below reveal that the VW Vento is beyond repair.

The cops were called and CCTV footage of the area has been taken and further investigations are underway. An FIR has also been lodged with the Saki Naka Police Station and reports are awaited. The CCTV footage has revealed that the miscreants arrived in a white Mercedes ML SUV. A man is seen stepping out of the vehicle at 3.37am. He walks upto the VW Vento with a jerry can in his hand. He is noted pouring the flammable liquid over the front wheel of the car and setting it ablaze even as he rushes into the rear of his Mercedes car and is driven off.

The VW in question, CH 01 AV 3377, was a silver colored vehicle which was parked in a guest parking spot. Another silver colored Vento is usually parked at the same spot every day. This could have been a case of mistaken identity but questioning the owner has not revealed any clues as to why the car could have been targeted. Though CCTV footage is being investigated, the registration number of the Mercedes SUV has not been identified.