Bengaluru-based electric mobility startup Simple Energy has been on the news ever since it revealed the Mark 2 electric scooter concept earlier this year. As per the latest development, the prototype version Mark 1 e-scooter has been tested at Automotive Research Association of India (ARAI) in Kothrud, Pune which has returned positive results.

The development tests conducted by ARAI returned a single-charge range of 230 km in Eco mode, a top speed of 103 kmph and a 0-50 kmph acceleration in 3.6 seconds. Now, the firm is looking to raise investments for its production model Mark 2. ARAI certification is for prototype Mark 1, and not the actual scooter.

In their internal tests, the company had claimed that its e-scooter can do around 280 km in a single charge, can attain a top speed of 100 kmph and a 0-50 kmph acceleration in just 3.2 seconds. Results obtained from ARAI tests were conducted on the prototype with 4kWh battery. Mark 2 would use a 4.8kWh battery. Keeping in mind the current league of e-scooters on sale in India – including the likes of benchmark products like Ather 450X, Simple Energy would be a name to watch out for.

Earlier, Simple Energy had announced that Mark 2 electric scooter will be made in India with a 90 percent level of localisation. This would make it eligible for benefits by the Government of India under FAME II (Faster Adoption and Manufacturing of Hybrid and Electric Vehicles) Scheme. In order to achieve this level of localisation, Simple Energy has gained INR 1.3 crore and plans to seek fresh investments of USD 1 million (Rs 7.5 crore) by next month. 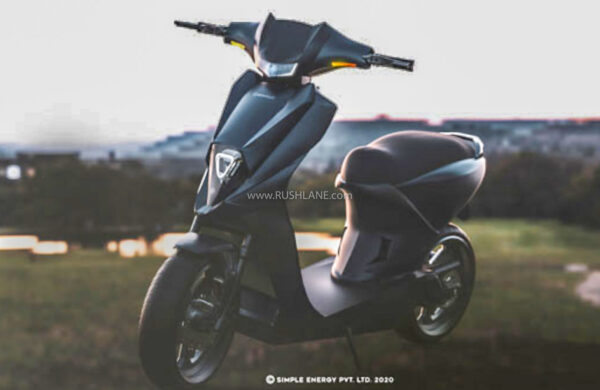 This will help kick start production at its Yelahanka facility near Bengaluru which has an annual production capacity of 50,000 units. The prototype scooter is powered by a 4 Kilowatt-hour battery pack that weighs 6 kg developed in-house by Simple Energy.

The battery can be charged 0-80 percent in just 60 minutes of fast charging. Simple Energy is planning to start experience centres in four major and two smaller cities along with exclusive Simple Energy dealerships and service centers.

Speaking of its design, it carries a futuristic styling that comes with a geometric body design, LED headlamps, LED taillights, a generous footboard and ergonomic seating. In terms of features, it gets a midship mounted electric motor, an IP67 rated touchscreen display, 4G connectivity and a chain-sprocket type final drive.

Simple Energy intends to start production of Mark 2 by February next year with a launch slated for mid-2021. Upon its launch, it will rival other electric scooters such as Ather 450X, TVS iQube and Bajaj Chetak. The startup announced that upon its launch, the e-scooter will be priced around Rs 1.10 lakh (ex-showroom).