Zac Hollis, director – sales, service and marketing, Skoda India, took to Twitter to reveal that he visited MG Motor and Kia outlets in the country on a mission to understand the competitors’ products and sales environment.

In a series of tweets after the showroom visits, the top official interacted with customers and confirmed a few developments regarding Skoda’s big-ticket India 2.0 strategy. Firstly, Hollis appreciated the design and layout of MG Hector showroom.

He stated that the outlet had a fresh corporate image and highlighted the British heritage. He also said that the salesman did seem to know the product well but was primarily focusing on the Hector’s cool connectivity features to make a pitch. Hollis added that the MG Hector is very Chinese and the fit & finish are let downs. 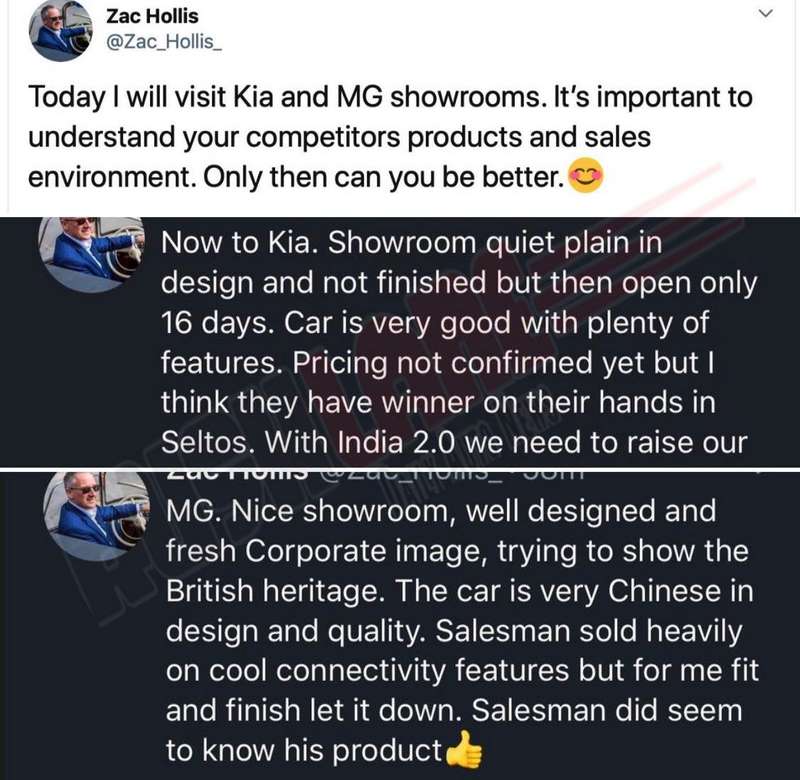 Commenting about Kia Seltos outlet, the Skoda India director said that the space is quite plain but also added that the showroom was opened just 16 days ago and the work is still in progress. The soon-to-be-launched Kia Seltos impressed the Skoda official so much so that he thinks Kia has a winner on its hands. He also admitted that Skoda needs to raise its game with India 2.0 strategy.

At the time of writing this post, Zac Hollis appears to have taken down the two tweets describing his experiences at MG and Kia showrooms, but that twitter thread between him and some of his followers (most of whom are existing or prospective Skoda owners) throws some light on launch timelines of upcoming products. 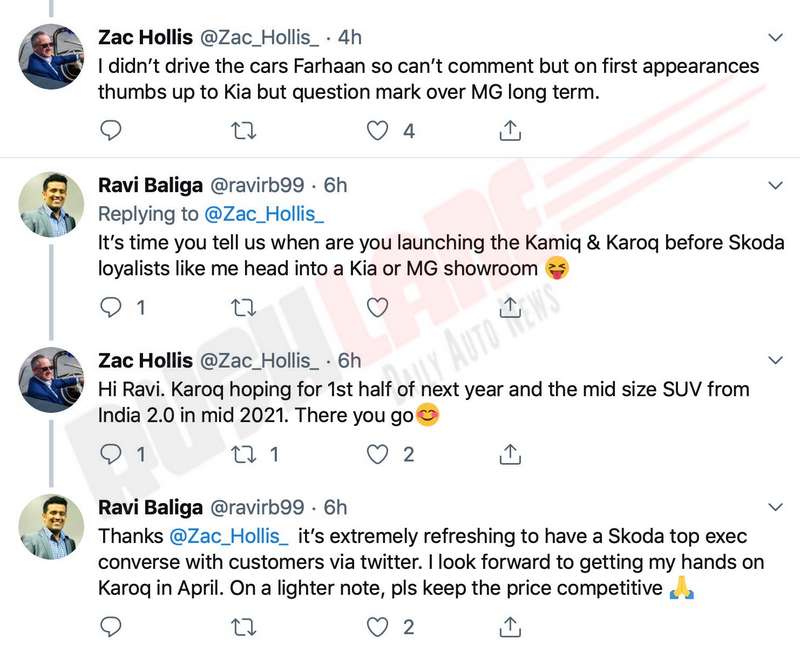 Responding to a query from one of his followers, Hollis confirmed that the Skoda India is getting ready to launch the Karoq in first half of 2020 while a heavily localized mid-size family SUV is being planned for 2021 launch. He further added that Skoda India needs to have new products in many segments to grow its volume.

The mid-size heavily localized SUV he mentioned would be the first product to be developed with the Indian R&D center taking the lead. The crossover will be underpinned by the VW MQB A0 platform which would spawn a series of emerging market-spec vehicles under both Skoda and VW brands.