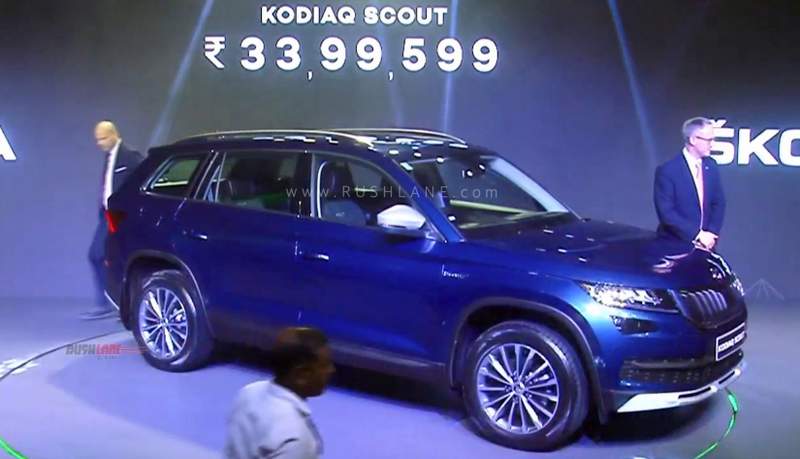 At an event in Mumbai today, Skoda launched a new variant trim of the Kodiaq, the Kodiaq Scout at Rs 34 lakhs (ex-showroom). This new trim of the Kodaiq will sit between the L&K variant and the Style variant.

The Scout is basically an off-road centric version of the Kodiaq. It gets some cosmetic updates which help it to have a more rugged look and some additional equipment which improves its performance off the road.

The overall list includes a styling pack which adds black plastic cladding on the front & rear bumpers, skid plates, ‘Scout’ badging on the body, 18-inch anthracite alloys, silver finish on the ORVMs and silver roof-rails to add to the off-roading look.

Mechanically there aren’t a lot of changes when compared with the standard Kodiaq. The Scout gets an ‘Off-road’ drive mode, which tunes the engine & transmission to adapt for better off-roading performance (works uptil 30 kmph).

Additionally, the Kodiaq also gets a Tyre Pressure monitoring system (TPMS) which shall come in handy when the car is taken for off-road excursions. Skoda has also installed a full underbody protection layer to keep the expensive hardware safe while the car is off the tarmac.

On the inside, the Scout gets an all-black interiors theme with Alcantara leather. Additionally, the seats get ‘Scout’ badging, helping it look distinctive than the standard Kodiaq.

Other creature comfort features include a panoramic sunroof, digital instrument display, ambient lighting, ventilated front seats and a touchscreen infotainment system with Skoda Connect, Android Auto & Apple CarPlay. Subtle hints about the ‘Scout’ are available across the car, from the door sills to the welcome screen of the infotainment system.

Until now, the Kodiaq was offered in two trims, a standard Style trim, which was priced at Rs 33 lakhs and the feature-rich L&K trim which costed Rs 36.78 lakhs (ex-showroom). All variants are powered by a 2 litre turbo diesel unit which churned out a good 150hp & 340 Nm of max torque. The motor came paired to a 7-speed DSG gearbox. Power is sent to all the four wheels as the Kodiaq came with a 4WD setup as standard.

The Scout trim will also share the the same powertrain with its other counterparts. As far as colour options are concerned, the Scout will be sold in four colours, namely Lava Blue, Magic Black, Moon White & Quartz Grey. It gets 9 airbags, best in class.

The Kodiaq will continue to primarily compete with the likes of VW Tiguan & Honda CR-V. Addition of the Scout trim will help it to offer a better value proposition when it will be compared with other rivals like Toyota Fortuner, Mahindra Alturas G4 and Ford Endeavor.