Every year, at the Skoda Academy, students create a concept car based on any of the company’s mass produced model. This exercise is named AZUBI student project. This year, students have created Slavia roadster, which is based on the Scala small car.

Skoda Slavia borrows inspiration from a 1958 speedster prototype. The aim was to combine today’s modern design with that from cars of the early days, when open tops were a common sight. A notable fact is also that this year’s design celebrates the anniversary of Skoda, which was founded in 1895, celebrating the carmaker’s 125th year. This was the year when Václav Laurin and Václav Klement sold their first bicycles under the name SLAVIA.

The Slavia is built by a total of 31 trainees, 26 boys and 5 girls, who have turned the Scala hatchback into a sporty spider. It sports a body design inspired by the Skoda 1100 OHC sports prototype of the 1957 which was an open top, 550 kg, 2 seater, built for rallies. 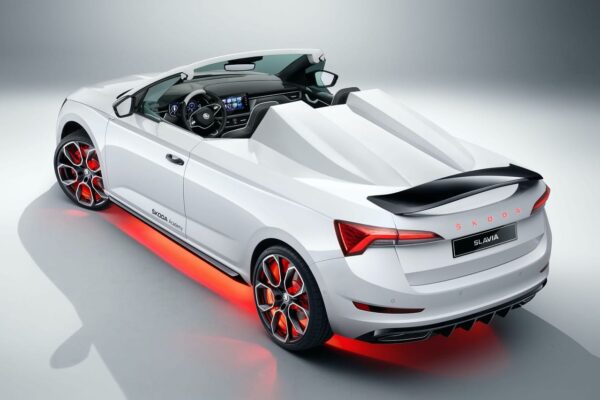 The Scala hatchback has been fitted with a reinforced underbody. The roof has been removed and rear doors have been added. It receives 20 inch alloy wheels from Kodiaq vRS, braking system from Octavia vRS. The exterior is finished in a three layer White Crystal Blue pearlescent finish with neon blue accents, programmable LEDs in the sills while sporting the 3 colours of blue, red and white of the Czech flag.

The interiors of the Skoda Slavia Roadster is seen with Sparco racing seats finished in perforated leather, four point seatbelts, leather touch across the interiors and a two tone steering wheel. It also sports a black leather parcel shelf with 2 embroidered lions behind which are 2 bass speakers and sub-woofer, offering total output of 2250W. Other interior features consist of a virtual cockpit, infotainment system and instrument panel similar to that seen on the Scala while ambient lighting is an added feature.

Carrying over from the production model, this prototype also gets a 1.5 liter TSI engine offering 148 hp power. It is mated to a 7 speed DSG dual clutch transmission.

The Slavia, sporty spider inspired by Skoda 110 OHC racing prototype is an open top concept. It is not intended as a series production model but is a project of the company’s vocational school in Mlada Boleslav where students are training in various aspects prior to a career with the company.