Skoda Vision RS is not just another sporty upgrade. Rather, it also showcases the future of Skoda’s RS performance models. It strongly suggests that Rapid will soon be getting its successor and there may be plans to introduce plug-in hybrid technology in upcoming vRS models.

In terms of design, some features of Rapid Spaceback have been used such as the large black glass tailgate. Upgraded features include an illuminated front grille, triangular headlights, and sharp horizontal taillights. Another key change is the spaced out Skoda lettering that replaces the badging on the tailgate. 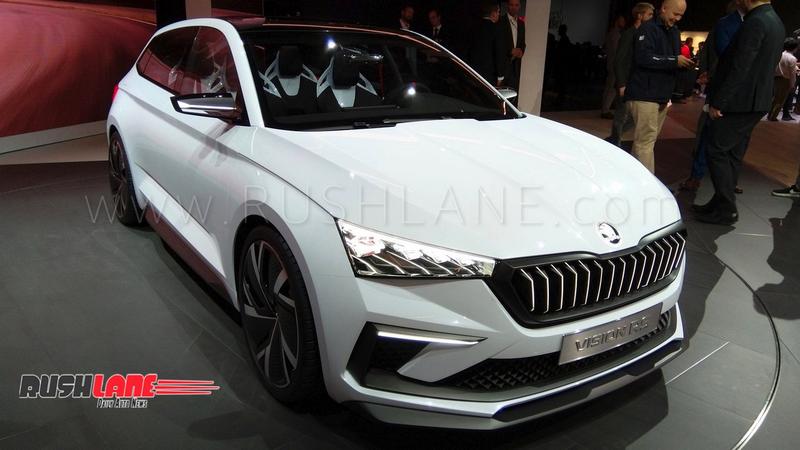 Vision RS is positioned as Skoda’s next-gen family small car. It will utilize Volkswagen Group’s MQB A0 platform, which is cheaper than the standard MQB platform used for supermini sized cars. Vision RS will utilize the maximum possible size, as available under MQB A0 platform. It will be 4,356mm in length, 1,810mm wide and 1,431mm in height. It will have a large 430-litre boot.

Changes that are unique to Vision RS include 20-inch alloys and prominent front and rear bumpers. A lot of carbon fibre has been used all throughout the vehicle, as evident in the front grille, front splitter, side air outlet linings, rear diffuser and rear wing. Another key change is the small-sized wing mirrors that seem to be inspired by World Rally Championship cars. 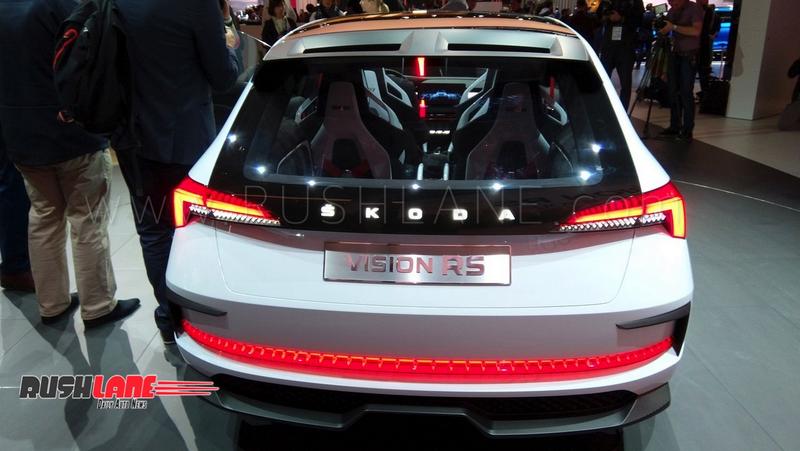 The insides have derived inspiration from Skoda’s Vision X concept, which is another upcoming model in the company’s line-up. There’s a floating style touchscreen display that looks neat in combination with the familiar dashboard and switchgear. Other key internal features include four bucket seats, decorative crystal glass and carbon fibre touches, all of which provide a preview of the interiors of next-gen Skoda cars.

Skoda Vision RS features a hybrid petrol-electric motor mated to a plug-in hybrid petrol powertrain. The petrol engine delivers max power of 148 bhp whereas the electric engine delivers 101 bhp. However, overall output is only 242 bhp. The power is transferred through a six-speed dual-clutch gearbox that drives the front wheels. According to Skoda, Vision RS has a top speed of 130 mph and it can go from 0 to 60 mph in 7.1 seconds. The electric motor utilizes a 13kWh battery pack that can run for around 43 miles on its own.

The petrol-electric hybrid engine configuration marks a new journey for Skoda. The hybrid technology will also be utilized for Superb PHEV that is expected to be launched in 2019. The upcoming vRS variants are also expected to have Skoda’s hybrid engine technology.