Suzuki Motorcycle India had previously expressed its interest in participating in the electric scooter segment when the time is right, and it looks like things have finally started falling into place. A pair of Suzuki Burgman test mules were spotted testing in public road recently, and they seem to be lacking the exhaust canister.

The Burgman with its imposing size, edgy styling and premium appeal makes for an interesting product for electrification. While the spy shots are not very clear, the black bulky element near the rear wheel hub is likely carrying the electric driving unit.

Technical specifications are scarce as of now but expect Suzuki to equip its first electric scooter for India with a motor offering around 80 kmph of top speed and a lithium-ion battery pack good for a range of around 70-90 km. The Japanese brand is likely to push more a very high localization level for the electric powertrain to take advantage of the government subsidy and arrive at a competitive price point.

The Suzuki Burgman electric test mules appear to be early prototypes to test the new components. We don’t expect the final product to be ready for the market launch before 2022. The styling is likely to be retained but there could be a few design touches to highlight the upcoming EV’s green credentials.

The Suzuki Burgman’s fully digital instrument console would be offering additional functions typical of an electric scooter. Going by the industry trend, it is reasonable to expect the EV to offer a range of connected features including a comprehensive smartphone app. 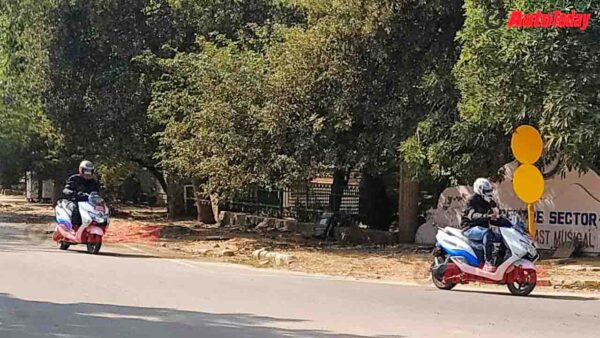 The Suzuki Burgman electric scooter will be locking horns with other premium electric offerings in the country like the Bajaj Chetak, Ather 450 (and its successor), TVS iQube, and so on. It remains to be seen if Suzuki will make its upcoming product available across the country right from day one or resort to a phased launch campaign, starting with tier-I cities.

The last few months after the lockdown has given the electric scooter market a new impetus as more and more people are embracing private mode of transport. These are exciting times for the nascent electric vehicle industry.