A new monster truck, based on the Suzuki Jimny has been showcased in Tokyo. Aptly named ‘Monster’, the new gen Jimny has undergone a lot of transformation. It is seen with new axles and massive tyres, that appear to have been taken off industrial machinery vehicle.

The Jimny Monster is also considerably taller and wider than the Jimny Sierra, on which it is based. It is painted in black, while it sports contrasting red and yellow graphics. 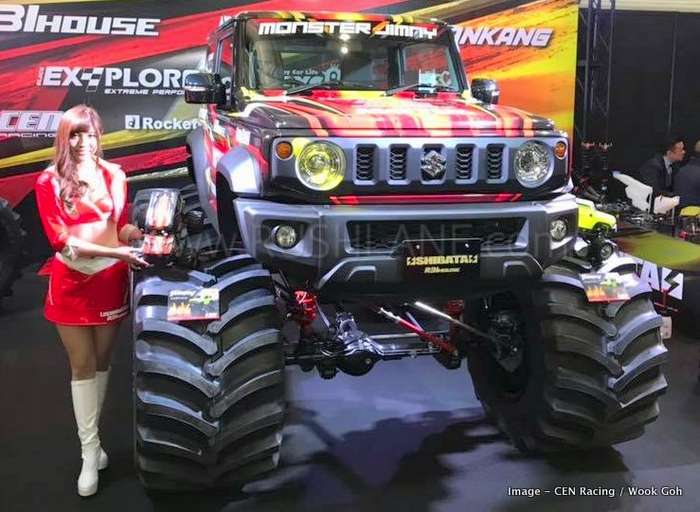 The Monster Jimny is dominated by its large tyres and massive wheels. As compared to the standard Jimny, the Monster offers longer suspension configuration, while the enhanced bumpers result in added protection while taking on the most rugged of terrain.

The Jimny Monster continues to sport the rounded headlamps and horizontal grille besides its flat roof profile. No engine specifications have been detailed for the heavy duty off road Suzuki Jimny Monster.

Impressed by the Monster truck version of Jimny, remote controlled car manufacturer, CEN Racing has partnered with Shibata R31, to launch a miniature version of the Jimny monster truck. The same was also showcased, next to the actual monster Jimny.

Suzuki has also showcased the Suzuki Jimny Pickup Style concept at Tokyo which is based on the same platform as the Suzuki Jimny Sierra SUV. It measures 3,550mm in length, 1,645 mm in width and 1,730mm in height. It gets a 1.5 liter, 4 cylinder, naturally aspirated petrol engine offering 102 hp power at 6,000 rpm and 130 Nm torque at 4,000 rpm mated to a 5 speed manual or 4 speed automatic transmission; the 4WD system is standard.

The Suzuki Jimny has seen massive demand resulting in long waiting periods extending upto 1 year in some countries. Production is in full swing, but it is still not able to meet demand. And all this, even before the car has arrived in India. As of now, there are no official plans to launch Jimny in India.

But, Suzuki might shift production of Jimny to their plant in Gujarat, which could ultimately result in the mini SUV getting launched here. Considering that the 2nd gen Jimny, which is being sold as Gypsy here, is going to be discontinued soon, the new gen Jimny could be the perfect replacement.