Suzuki revealed the new generation Jimny earlier this year. The Suzuki Jimny and Jimny Sierra have been launched in Japan, in three variants and priced from 14,58,000 JPY (Rs 9 lakhs) and more recently in South Africa markets. However, launch in India is not on the cards even though it was expected that this sub 4 meter, 2 door SUV will be a successor to the Maruti Suzuki Gypsy.

All new 4th generation of Suzuki Jimny has been crash tested in Europe. The compact SUV has scored a 3 star rating for adult safety. The version crash tested, is a 3 door variant. It is equipped with dual airbags in the front and a side head, chest and pelvis airbag. 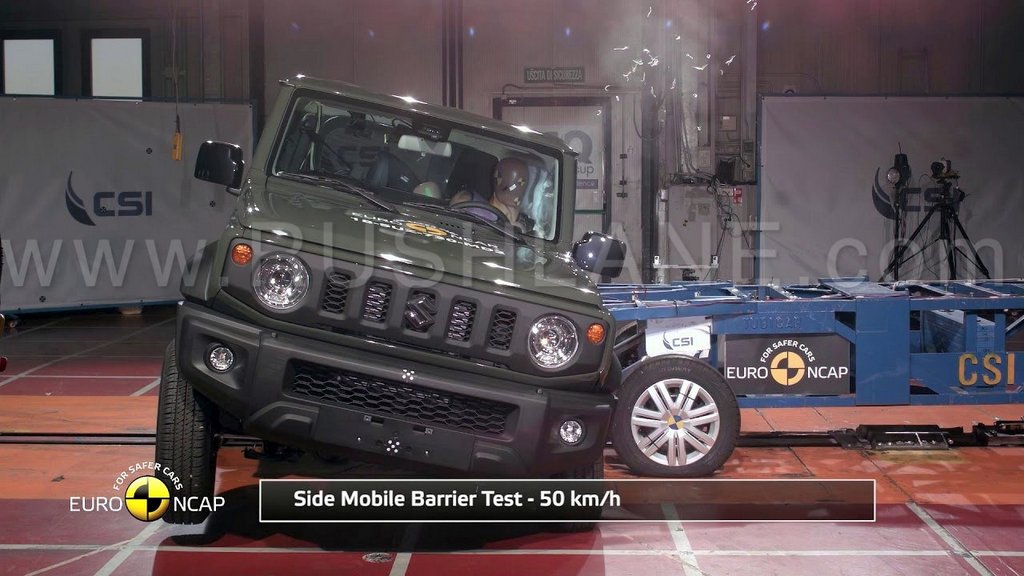 Experts comment on crash test – “In the frontal offset test, there was insufficient pressure in the driver’s airbag to prevent it from ‘bottoming out’, allowing the head to contact the steering wheel. The score for the head was penalised for the behaviour of the airbag and the displacement of the steering wheel, and protection for this part of the body was rated as marginal. The passenger compartment was extensively deformed in the offset test, especially around the door-frame and the score for the driver’s chest was penalised for this unstable collapse. Combined with marginal dummy readings, protection for this body area was rated as weak. Although dummy readings indicated good protection of the knees and femurs of both driver and passenger, structures in the instrument panel and dashboard were thought to pose a risk of injury to occupants of different sizes, and protection was rated as marginal.

In the full-width, rigid-barrier impact protection of the head of the rear passenger dummy was rated as weak, based on dummy readings during the test and protection of the chest of both driver and rear passenger was marginal. Tests on the front seats and head restraints showed marginal protection against whiplash injury in a rear impact. A geometric assessment of the rear seats indicated good protection. The standard-fit autonomous emergency braking (AEB) system performed well in tests of its functionality at the low speeds, typical of city driving, at which many whiplash injuries are caused. However, the Jimny did not qualify for these points as Euro NCAP requires good head restraint performance as a pre-requisite for AEB points.”

Suzuki Jimny was showcased at the Gaikindo Indonesia International Auto Show. It is available in two variants, a Kei car version meant exclusively for sale in Japan and a Sierra variant which is larger and more powerful for sale in global markets. Suzuki Jimny measures 3,395mm in length, 1,475mm in width and 1,725mm in height.

The Kei version is powered by a R06A 0.66 liter, 3 cylinder petrol engine offering 64 PS power and 96 Nm torque while the Sierra version measures 3,550mm in length, 1,645mm in width and 1,730mm in height and is powered by a K15B 1.5 liter petrol engine offering 102 PS power and 130 Nm torque. These engines will be mated to 5 speed manual or 4 speed auto while the Jimny will also get Suzuki’s Allgrip Pro AWD system with low range transfer gear and LSD traction control. Full crash test report is below.