After months of waiting, the new BS6 Suzuki V-Strom 650 XT adventure motorcycle has been launched in India today

Suzuki Motorcycles India has launched V-Strom 650 XT today in India. The adventure bike was launched in Australia a couple of weeks ago. The ADV has been able to carve a niche for itself in the Indian biking fraternity. Price is Rs 8.84 lakhs, ex-sh. Two colours are on offer – Pearl White and Champion Yellow.

The updated V-Strom 650 was showcased at the last edition of AutoExpo held in February this year. The India-spec model is similar to the one which went on sale in Australia earlier this month. The adventure motorcycle was expected to hit showrooms in April itself, however, Covid-19 had some other plans which forced the makers to alter theirs.

2021 iteration of the middleweight adv-tourer gets an updated engine which now complies with the latest Euro-5/BS6 emission standards. Visually the bike remains identical to its predecessor. It, however, gets new colour options to choose from. These include a full-black paint with a red beak, white colour with gold rims on wheels and silver paint with blue rims and highlights. India gets two colours only.

Even design-wise, V-Strom 650 XT is similar to its predecessor that features a stepped-up seat, a sloping fuel tank with extensions, a raised transparent windscreen and an upswept windscreen. 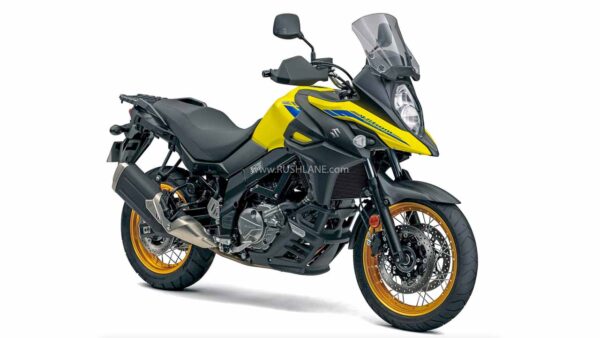 With regards to features, it gets a smartphone charger, handguards, a semi-digital instrument cluster, a 12-V accessory power outlet and a plastic sump guard. In addition to this, it receives a bunch of electronics including a dual-channel ABS, three-stage switchable traction control as standard and more.

Coming to its powertrain, it continues to draw its power from a 645cc, liquid-cooled, V-Twin motor that churns out 70 bhp at 8,800 rpm and 62Nm of peak torque at 6,500rpm. These figures are almost identical to the outgoing model. This unit is linked to a six-speed transmission. The upcoming model also features Suzuki’s Low RPM to assist the system in order to minimise engine stalling by automatically tuning the idle speed at low revs. 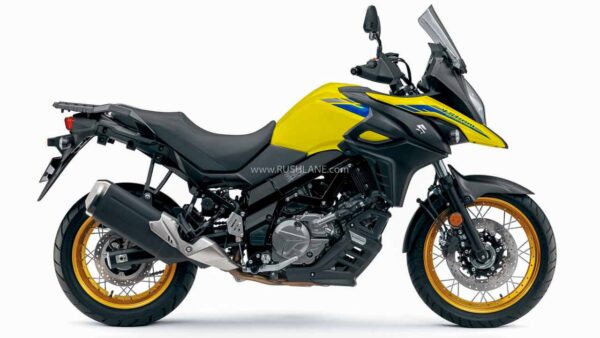 Nothing is different when it comes to the dynamics of the adventure bike. V-Strom 650 XT rides on 19-inch front and 17-inch rear spoke wheels wrapped in tubeless Bridgestone Battlax Adventure A40 tyres.

Suspension duties are handled by 43mm telescopic forks at front and link-type preload adjustable mono-shock at rear. Anchorage is taken care of by twin 320mm discs at front with twin-piston calipers and a single 260mm disc at rear with a single-piston caliper. It tips the weighing scale at 216 kg.

Mr. Koichiro Hirao, Managing Director, Suzuki Motorcycle India Pvt. Ltd. said, “V-Strom has made its own following in India. The ultimate adventure tourer has proved its mettle in the highway touring capabilities while exploring different terrains. It is truly a masterpiece with the ultimate balance provided by the natural riding position, comfortable seat and the flexible engine character. This is our first BS6 compliant big bike and we are confident that this cleaner and greener motorcycle will continue to win people’s hearts with its performance and maneuverability as it hit the Indian roads.”