Tata Motors took the wraps off the new Altroz premium hatchback at the ongoing Geneva Motor Show. Based on the 45X concept, which was showcased at the 2018 Auto Expo, Altroz gets endless list of driver and passenger features, be it comfort or safety.

Tata Altroz will rival Maruti Baleno, Hyundai i20 and Honda Jazz. It will sit above the Tiago and Bolt in the company’s line-up of hatchbacks. Once launched, Altroz will be Tata’s flagship hatchback. It is sub 4 meter in size. The new Altroz will measure 3,988mm in length, 1,754mm in width and 1,505mm in height. It sits on a 2,501 mm long wheelbase. The Altroz sits on 17” alloy wheels and gets 205/50 tyres seen on its top spec variant. 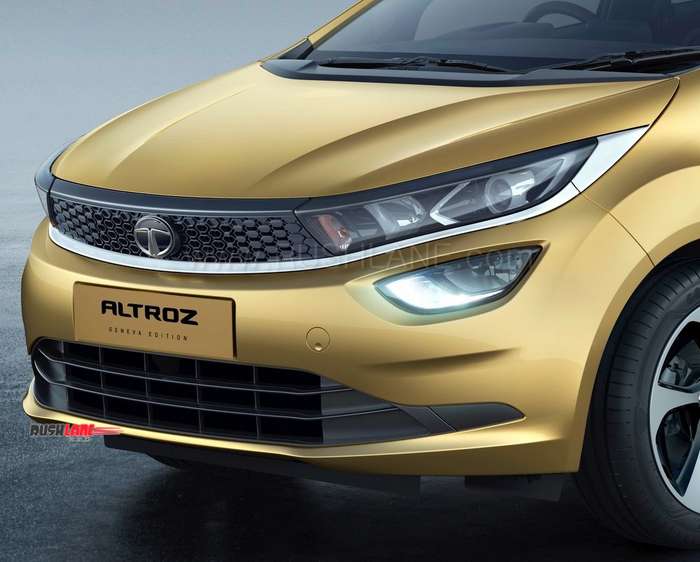 Tata Altroz is most likely going to be available with only petrol motor at the time of launch later this year. Diesel will not be on offer. The petrol engine which powered by the display car is a 1.2 liter, 3 cylinder engine offering 102 hp power at 5,500 rpm and 140 Nm torque at 1,700-4,000 rpm. It is mated to a 5 speed manual gearbox. The engine is BS6 compliant.

The reason diesel might not be offered is its high cost. With BS6 implementation, difference in price of petrol and diesel variant of same car will cross Rs 2 lakhs. For cars in sub 4 meter segment it does not make sense for buyers to pay that huge a difference. Almost all sub 4 meter cars will only be offered with petrol engine once BS6 is implemented in India, by April 2020. 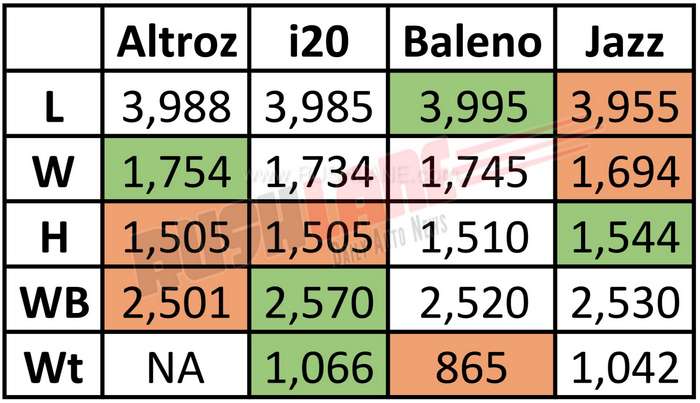 As shown in the table above, Baleno is the longest car in the segment, while Jazz is the smallest in length. In terms of width, it is the Altroz which is no 1, while Jazz is last. Honda Jazz is the tallest of all in segment, while Altroz and Hyundai i20 are the least tall. Hyundai i20 has the longest wheelbase, while Altroz has the lowest wheelbase. Altroz weight has not been revealed. But it is expected to be the heaviest car in the segment.

Tata Altroz is positioned on the ALFA (Agile Light Flexible Advanced) Architecture. This platform offers higher levels of flexibility, adaptability, space and safety. It can be the basis of cars which are in the range of 3.7 to 4.3 meters in length. This basically covers 90 percent of the passenger vehicle segment in India. Tata claims that the Altroz will be a NCAP 5 star rating car, with its strong body structure and safety features such as dual front airbags along with ABS, rear parking sensors and ISOFIX mounts as standard. The platform is a 5 star safety platform and Tata aims to offer 5 star safety on Altroz from Day 1.

The Altroz also gets the Impact 2.0 Design Language, making it the second vehicle in the company lineup to receive this after the Harrier. Altroz is poised for launch in India sometime later this year, most likely in October. It is expected to be priced between Rs.5.5-8.5 lakh range.