The Tata Aria was launched in 2010. It was launched to take on the Toyota Innova, but failed to do so. Sales declined gradually, and in 2017, the SUV was officially discontinued from the market. Low sales was not the only reason for the Aria to get discontinued. Another reason was the launch of Hexa, which many believed to be nothing, but a new gen Aria.

Tata Hexa is positioned on a reworked version of the Aria platform and though the Aria and Hexa sport similar silhouettes, the similarities end here. The Hexa gets completely new exteriors and interiors. The Hexa has been designed according to Tata new IMPACT design language. 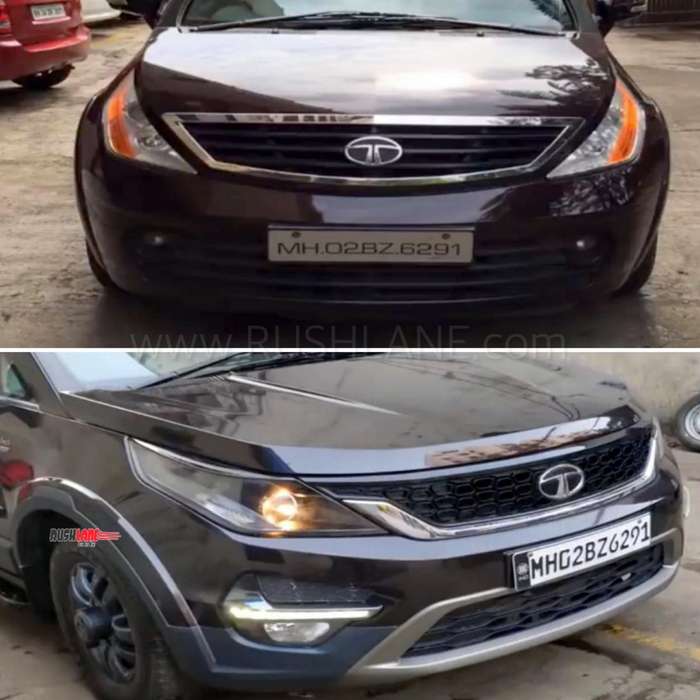 An owner has now transformed his Aria into a Hexa via extreme modifications. The entire transformation took 15 days to complete but cost involved has been mentioned. The end result is a copy of the Tata Hexa which only a trained eye would be able to tell that this is infact a mod job and not the real thing.

Modifications that turned the Aria 4×4 into a Hexa included a complete revamp of its rear end. Body panels of the Aria have been removed and replaced with those from the Hexa. Boot lid is also replaced with a Hexa boot lid after which the front panels were removed and Hexa panels were put in. Watch the modification video, which has been shared by Dikshit Shetty. The modification has been done by Kishan Jamble.

The engine bay lid and grill are also replaced with Tata Hexa parts. The modifications extend further to headlamp and rear tail lamp also borrowed from the Hexa along with wheel arch mouldings, mirrors and the modified vehicle even takes off the distinctive Arizona Blue shade from the Aria.